Ahead of MBA Quarterly Survey, Reports Show Drop in Delinquencies, Rise in Foreclosures 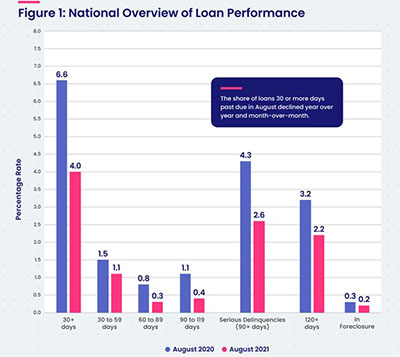 CoreLogic released its monthly Loan Performance Insights Report for August, showing 4% of all mortgages in the U.S. were in some stage of delinquency (30 days or more past due, including those in foreclosure), a 2.6-percentage point decrease in delinquency from a year ago, when it was 6.6%.

The report also noted the Foreclosure Inventory Rate fell to 0.2%, down from 0.3% a year ago, tying the lowest foreclosure rate recorded since CoreLogic began recording data (1999). The Transition Rate (the share of mortgages that transitioned from current to 30 days past due) fell to 0.6%, down from 0.9% in August 2020.

CoreLogic said households, facing slower than anticipated employment growth — August saw an increase of only 235,000 new jobs compared to the expected 720,000 —have found creative ways to cut back on spending to prioritize mortgage payments. A recent CoreLogic survey found more than 30% of respondents said they would cut back on both entertainment and travel to focus on repaying outstanding debt.

“The unprecedented fiscal and monetary stimuli that have been implemented to combat the pandemic are pushing housing prices and home equity to record levels,” said Frank Martell, president and CEO of CoreLogic. “This phenomenon is driving down delinquencies and fueling a boom in cash-out refinancing transactions.”

“The decline in the overall delinquency rate to its lowest since the onset of the pandemic is good news, but it masks the serious financial challenges that some of the borrower population has experienced,” said Frank Nothaft, chief economist at CoreLogic. “In the months prior to the pandemic, only one-in-five delinquent loans had missed six or more payments. This August, one-in-two borrowers with missed payments were behind six-or-more monthly installments, even though the overall delinquency rate had declined to the lowest level since March 2020.”

Meanwhile, ATTOM’s October U.S. Foreclosure Market Report said 20,587 properties had foreclosure filings, up by 5 percent from September and by 76 percent from a year ago.

“As expected, now that the moratorium has been over for three months, foreclosure activity continues to increase,” said Rick Sharga, executive vice president of ATTOM subsidiary RealtyTrac. “But it’s increasing at a slower rate, and it appears that most of the activity is primarily on vacant and abandoned properties, or loans that were in foreclosure prior to the pandemic.”

–Lenders started the foreclosure process on 10,759 U.S. properties in October, up 5 percent from last month and up 115 percent from a year ago.

This morning, MBA releases its Third Quarter National Delinquency Survey, which covers 38 million loans on one- to four- unit residential properties. Loans surveyed are reported by more than 100 servicers, including independent mortgage companies and depositories such as large banks, community banks and credit unions.