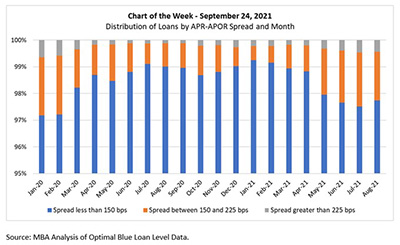 Under the Ability-to-Repay/Qualified Mortgage rule, loans that meet the rule’s requirements for QMs obtain certain protections from liability. In December 2020, the Consumer Financial Protection Bureau revised the rule implementing the ATR (with an additional delay announced in April) so that a first-lien loan meets the General QM loan definition only if the annual percentage rate exceeds the average prime offer rate for a comparable transaction by less than 2.25 percentage points as of the date the interest rate is determined (setting aside the continued ability to use Appendix Q to qualify loans through September 2022).

In this week’s MBA Chart of the Week, we analyze Optimal Blue single-family, 30-year fixed mortgage rate origination loan data from January 2020 through August 2021. We further group loans in the chart by the spread between their reported note rate and the (monthly average of the) Freddie Mac Primary Mortgage Market Survey rates to approximate the APR-APOR spread.

Due to the potential risk from an ATR rule violation, many lenders have preferred to stay within the confines of safe harbor QM lending. Those who have a greater willingness to offer non-QM products may charge higher rates to offset the risk, even to creditworthy borrowers. This has resulted in much lower credit availability, despite stronger economic and employment conditions. Our Mortgage Credit Availability Index shows that despite recent upticks in the index, credit availability, is still close to 2014 lows.