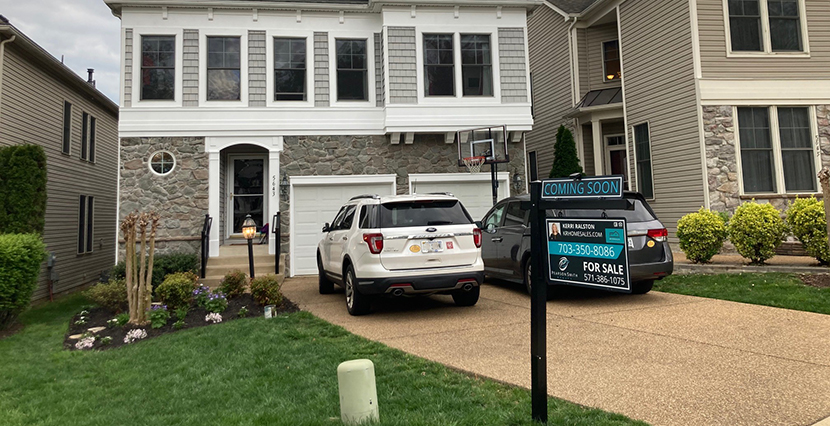 Beware the Ides of April—unless it’s news you seek. Because we have plenty of housing market reports below to slake your thirst.

ATTOM Data Solutions, Irvine, Calif., released its Q1 2021 U.S. Foreclosure Market Report, which shows 33,699 U.S. properties with foreclosure filings — default notices, scheduled auctions or bank repossessions —  during the first quarter, up 9 percent from the previous quarter but down 78 percent from a year ago.

The report also shows 11,880 U.S. properties with foreclosure filings in March, up 5 percent from the previous month but down 75 percent from a year ago — the second consecutive month with month-over-month increases in U.S. foreclosure activity.

“The foreclosure moratorium on government-backed loans has virtually stopped foreclosure activity over the past year,” said Rick Sharga, executive vice president of RealtyTrac, an ATTOM Data Solutions company. “But mortgage servicers have been able to begin foreclosing actions on vacant and abandoned properties, which benefits neighborhoods and communities. It’s likely that these foreclosures are causing the slight uptick we’ve seen over the past few months.”

The report said overall rate lock volume was up 2.5% in March, with both purchase locks (+32%) and cash-out refinance locks (+4%) seeing month-over-month growth. Rate/term refinances, however, were down significantly on recent interest rate rises; locks on such loans were down more than 26% from February and by more than a third since the start of 2021. This decline has shifted the originations market mix to 52% purchase and 48% refi, marking the first time the balance has been in favor of purchase loans since December 2019.

“Recent – and sharp – upward movements in interest rates have shifted the mortgage originations landscape very quickly,” said Black Knight Secondary Marketing Technologies President Scott Happ. “The wave of refinance activity of the last year and some months has suddenly given way to a purchase-heavy mix. The implications of this shift touch nearly every area of mortgage lending, which in turn has implications for the wider economy.”

A new TransUnion Global Payment Hierarchy study found the COVID-19 pandemic had a pronounced effect – in a short period– on how people paid their debts, particularly when faced with financial stress. In the United States, the changes were prominent across multiple credit products, with consumers clearly prioritizing their mortgage loan payments over auto loans and credit cards.

TransUnion analyzed and compared trends for wallet profiles that are popular across the countries studied, including the United States, Canada, Colombia, India and South Africa. The study observed within each country those consumers with one or more credit cards and at least one personal loan, to identify if any changes took place in the payment hierarchy. To determine which credit product was prioritized over the other, TransUnion observed payment performance of the credit products over a 12-month period, including whether or not one of the credit cards or personal loans went at least 30 days delinquent.

In the U.S., the study observed that personal loans were prioritized when consumers possessed multiple credit cards, though the gap between delinquency rates—indicating the degree of preference—narrowed during the pandemic. An interesting dynamic occurred in the U.S. and other countries wherein the payment hierarchy flipped for those consumers possessing only one credit card and at least one personal loan. In those cases, credit cards were prioritized during the pandemic, in contrast to the pre-pandemic preference for personal loans. In the U.S., this particular group comprised 20% of the overall study population.

“Cash was clearly not king during the early parts of the pandemic. Millions of people opted to use their credit cards to make digital transactions from the safety of their home for groceries, clothes or other everyday items,” said Matt Komos, TransUnion’s head of research and consulting in the U.S. “If you only have one credit card and you were worried about visiting stores at the height of the pandemic, there’s a strong likelihood you will preserve that card to continue spending and making digital transactions. If you possess three cards, though, it’s far more likely that you will go delinquent on one of them before you do so with a personal loan if you are facing financial hardship, as many consumers can continue to get by as long as they have access to at least one card.”

In the U.S., TransUnion also conducted a payment hierarchy study focusing on the three most popular credit products in the country – auto loans, credit cards and mortgages. It said 27.8 million consumers held all three loans as of Q3 2020, and mortgages were clearly prioritized over the other credit products. This dynamic has held true since Q4 2017.

The pandemic, though, has caused even greater prioritization of mortgages over the other credit products. For those consumers possessing auto loans, credit cards, and mortgages, the 30+ days past due delinquency rate at 12 months following observation was lowest for mortgages, at 0.75%, as of Q3 2020. Auto loans had the second lowest delinquency rate at 1.13%, followed by credit cards at 1.95%. This is very likely connected to the growth in home prices over the last several years as housing markets across the country have remained strong, and consumers’ desire to protect the equity in their homes. As well, as lockdowns and the shift to work/school from home permeated during the pandemic, keeping current on home loan payments took on increased importance in 2020.

“Mortgage is once again the clear priority for U.S. borrowers,” said Komos. “The mantra, ‘you can’t drive your home to work’ doesn’t have the same effect when millions of Americans are waking up, showering, eating breakfast and taking only a few steps to their home office.”

Redfin, Seatle, said nearly two-thirds (64%) of home offers written by Redfin agents in March faced competition, up from a revised rate of 62.1% in February and marking the 11th-consecutive month of such activity.

Salt Lake City had the highest March bidding-war rate of the 42 U.S. metropolitan areas in Redfin’s analysis, with 87.1% of offers written by Redfin agents facing competition. Next came Pittsburgh at 82% and Boise, Idaho at 81.5%. Virginia Beach, Va. and Las Vegas rounded out the top five, at 80.9% and 78.1%, respectively.

The report can be accessed at https://www.redfin.com/news/real-estate-bidding-wars-march-2021.

Zillow: What to Expect in Housing Market After Pandemic

Zillow, Seattle, said its survey results indicate many of the features that have marked the pandemic-era housing market — including heavy buyer demand, tech tool adoption and rising home prices — are likely to persist post-pandemic. Strong demand for homes is likely to continue, but there may be little change in the locations and types of homes Americans prefer.

“As the pandemic subsides and the economy begins to recover, lowered health risks and renewed homeowner financial confidence should bring more sellers to the market,” said Zillow economist Arpita Chakravorty. “That increased inventory would ease buyer competition that has driven prices higher during the pandemic, but expect a steady pace of home value growth to persist into the near future. Mortgage rates have risen some but are still low by historical standards, adding to people’s purchasing power and helping to keep competition for homes revved up.”

An overwhelming majority (95%) of economists and real estate experts surveyed by Zillow as part of the Zillow Home Price Expectations survey said an increased preference to work remotely at least part time is a permanent shift. Of employed people who work remotely at least one day a week, 23% said they are more likely to consider moving because of the pandemic – only 13% of employed people who always work at their employer’s location said the same. With widespread teleworking expected to continue when the pandemic ends, boosted home buying demand thanks to the added flexibility offered by remote work is likely to persist — Zillow economists expect 17.2% more home sales this year than in 2020.

However, when asked about Americans’ preference for living in the suburbs over urban areas, the same share of ZHPE panelists said the shift was permanent as said the shift was temporary (46%) — 8% said there has been no shift at all. The results were similar when asked whether consumer preference has changed in favor of proximity to smaller cities over larger cities, or larger homes in favor of smaller homes.

A majority of panelists (53%) expect inventory will begin to grow again this year, likely during the second half of 2021. An increase in existing homes being listed for sale is expected to be the biggest factor in the reversal, with 38% of panelists saying that is the most likely catalyst for inventory growth.

Redfin: 1 in 5 Americans Believes Climate Change Is Hurting Home Values In Their Area

One in five Americans (21%) believes the increasing frequency or intensity of natural disasters, extreme temperatures and/or rising sea levels are hurting home values in their area, according to a new survey featured in a report from Redfin, Seattle.

“Climate change is posing an increasingly large risk to homeowners. As storms, wildfires and rising sea levels render more areas undesirable in the coming years, housing values in those areas will decline. This means a growing number of homeowners will see a major source of wealth—their home equity—wiped away,” said Redfin Chief Economist Daryl Fairweather. “We may also see folks in at-risk areas choose to rent instead of own to avoid getting stuck with devalued properties.”

Additionally, the survey found more than half (59%) of surveyed homeowners have invested in making their homes more resilient to at least one climate-related risk, with over a third (36%) spending $5,000 or more.

The report can be accessed at https://www.redfin.com/news/climate-change-impact-home-values-survey/.

Freddie Mac, McLean, Va., issued its Quarterly Forecast, saying mortgage rates will continue to move up with the 30-year fixed-rate mortgage averaging just above 3 percent through the end of 2021.

“As the economy continues to improve, we expect conditions to remain generally favorable for the housing and mortgage market,” said Sam Khater, Freddie Mac Chief Economist. “Higher mortgage rates have the potential, however, to dampen the robust demand we’ve been experiencing, and we therefore forecast total originations to decline to $3.5 trillion in 2021. “Other important obstacles to consider include high home prices and low housing supply that will certainly influence the trajectory of purchase activity specifically.”

According to the forecast: