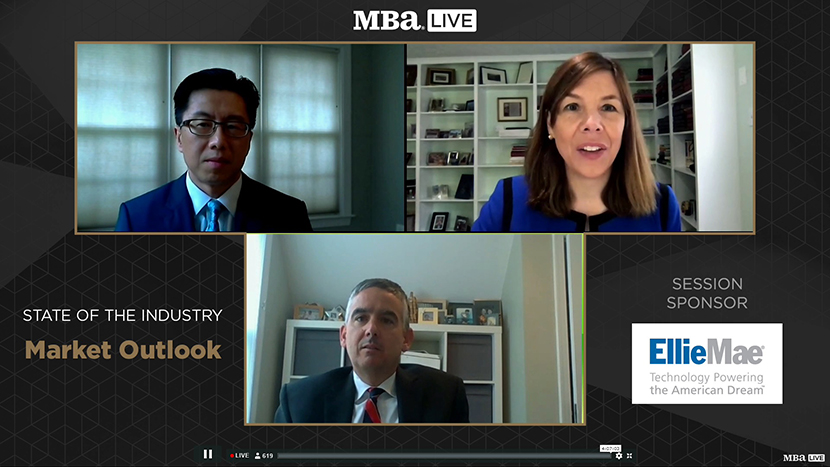 “This environment is unprecedented in both the speed and scope of this downturn,” Fratantoni said. “Starting from a place where we had an incredibly strong job market and going to a place where the unemployment rate is at the highest level since the Great Depression is truly unprecedented.”

Fratantoni noted the Labor Department typically reported 200,000 new unemployment claims per week in early 2020, at or near a 50-year low. Then the crisis hit and in mid-March that figure jumped to 3.3 million, nearly five times the prior record set during the Great Recession. The next week new unemployment claims more than doubled to 6.9 million.

“Over the past few weeks we’ve seen more than 36 million Americans lose their jobs through layoffs,” said Fratantoni. “Again, a truly unprecedented time for the job market.”

In April alone the U.S. economy lost 20.5 million jobs as the economy locked down across the country. The unemployment rate jumped from 4.4 percent in March to nearly 15 percent in April. “But even that 14.7 percent ‘headline’ unemployment rate doesn’t capture the true stress in the economy,” Fratantoni said. “It does not capture people who are working part time but want a full-time job; does not capture people who have stopped looking for work because they feel there is no work to be found; and it does not include people who are only marginally attached to the labor force.” When those “underemployed” individuals are included in the calculation, the unemployment rate could exceed 22 percent, he said.

MBA Vice President of Industry Analysis Marina Walsh noted prior to the pandemic, the MBA National Delinquency Survey had reported mortgage delinquencies at historic lows. “By the end of March, we were already seeing the effect of this pandemic on delinquencies,” she said.

MBA Associate Vice President of Economic and Industry Forecasting Joel Kan said the housing market saw steady year-over-year growth from 2016 through 2019. “It started off 2020 really well,” he said. “We were up about 10 percent year-over-year for the first two and a half months of this year. Then we saw this very fast escalation of social distancing measures and restrictions, which caused a big pullback in purchase activity.”

But Kan said the market has seen a “quite sharp turnaround” and is now only 9.5 percent behind where it had been (on a year-over-year basis) before the pandemic. “This is not to say there is not going to be an impact to the housing market,” he said. “March through May is usually the peak of the spring home buying season, so this [pandemic] really came at a time when we expect the most purchase activity to happen. So there is going to be a little bit of a loss there, but we are certainly heading back in the right direction and hopefully will make it up to year-over-year gains in the next few months.”

Kan noted MBA’s latest forecast expects 30-year fixed-rate mortgage rates to stay flat, increasing a bit toward the end of the year through next year.