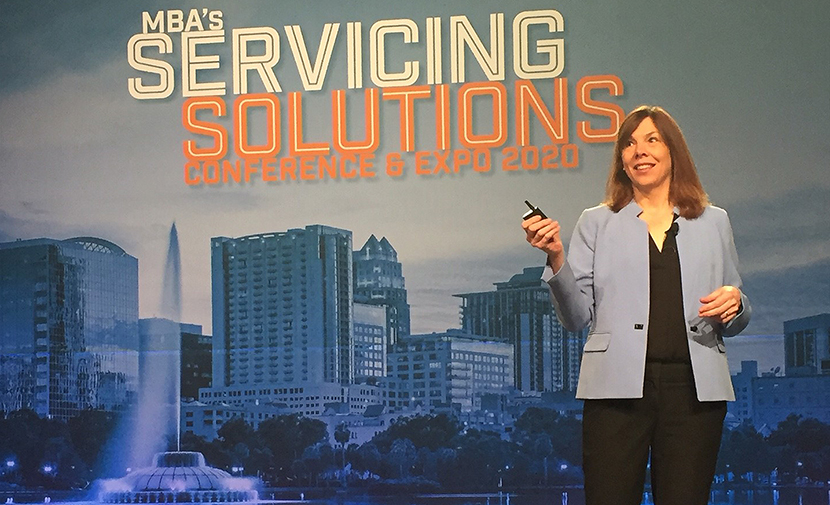 ORLANDO—Low mortgage rates, improved home-building rates and a growing number of people aspiring to homeownership makes for an optimistic formula for the mortgage servicing industry, said Mortgage Bankers Association economists, despite some potential headwinds in the short term.

“The economy is currently supportive of house market growth,” said MBA Associate Vice President of Economic and Industry Forecasting Joel Kan here at the MBA Servicing Solutions Conference & Expo. “We’re in the middle of the third big refinance wave in the past decade.”

However, “we do see a slowdown on the horizon,” Kan said. “Rates will remain low, but we expect some volatility down the road—some swings in the near term. We expect a slowdown in the second half of the year.”

So, what’s driving U.S. growth? Kan said consumer spending, the number-one driver in economic growth, is still “moving along at a good clip. Consumer spending is up about 6 percent from prior years. It’s usually an indication that households are in pretty good shape. As long as households feel confident, then spending will continue.”

Gross private investment is slowing a little bit, Kan said, and that is starting to show up in the U.S. economy. And equity markets were strong—until this week, amid fears of the spreading coronavirus.

“Even though growth has been strong, there has been a flight to quality,” Kan said. “In 2019 we had slower overall growth, Now, we have a broader threat from the coronavirus. If you saw what markets did [Feb. 24], then you know how serious this is. We are still in a very volatile, fragile financial market.”

Those fears have been justified, Kan said because of the impact in the financial markets. “The Chinese economy is the second-largest in the world; the numerical impact remains unclear, but there is the potential for a far worse outcome than we see right now,” he said. “More fundamentally, some sectors are in retraction mode—exports, manufacturing, even servicing, which remains strong, but the forecast calls for a slowdown. On the bright side, durable goods and non-defense capital goods remain strong.”

The job market has also remained strong, with unemployment at a 50-year low. “At 3.6 percent, we are well below what economists define as ‘full employment,’” Kan said. “And wage growth appears to be keeping up with inflation. Wage growth is picking up because there are more openings than there are jobs; this is good news, but it’s also a potential red flag. We could see a potential slowdown.”

Growth in mortgage debt and non-mortgage debt continues. “We are seeing student loans growing at a pretty healthy clip and auto loans have been growing—at the expense of home equity, whether it’s cash-outs and HELOCs,” Kan said. “Mortgage debt outstanding is still growing—it could have been faster, but it’s still at a pretty healthy pace. Households have less of a financial burden. While debt levels are high, low rates have resulted in a lot of deleveraging of overall consumer debt.”

With the weakening picture, economists are still looking at a flat yield curve. “The Fed might raise rates once next year, so low rates are going to continue,” Kan said. “What this means for us is that the refi market continues to be pretty healthy. We might not get back to 2016’s $2.2 trillion level, but it’s still going to be a busy year for lenders and servicers. We don’t know how much is left in there, but with low rates, we can still expect this activity, particularly with cash-outs.”

Shifting to the purchase market, Kan said signs are pointing to more sustained household formation over the past couple of years. “The long-term view is that after years of rental household formation, we’ve seen more than a million owner-occupied formations per year, which is a pretty healthy pace,” he said. “We’re starting to see improvements in homeownership rates across the spectrum, including the younger cohorts. We’ll be supporting growth going forward. And Millennials, which are approaching prime homeownership age, are starting to show interest in being homeowners.”

There is one plot twist, however: overall mobility continues to trend down. “For various reasons, people are staying put and staying in their homes longer,” Kan said. “If a homeowner doesn’t move, then the house doesn’t go on the market, which means we this transitional development means fewer existing home sales and lower inventories. On the other hand, housing starts and permits have been trending up for the first time since the 2000s. Builders are figuring out ways to get the work done, and they’re starting to match homes with the type of demand, particularly for lower-end and starter buyers.”

Kan said purchase applications are off to a strong start in 2020, and are expected to continue this year. “Home prices have recovered significantly, post-crisis,” he said. “We went through a lot of pain 10 years ago, and home prices have more than recovered. But a lot of this is because inventory hasn’t kept up with demand. We’re in a better place overall, but price growth is slowing with increased construction.”

Kan added mortgage credit availability has loosened somewhat over the past year, about twice what it was during the recession, but nowhere near how loose credit was pre-crisis. “We expect some volatility going forward, but in general borrowers are in a pretty good place,” he said.

The cost of non-performing loans is also dropping. “Servicers used to have layers and layers of quality control and other measures in place,” Walsh said. “We’ve now reached the point where servicers can sit back and consolidate operations, so they’ve been able to reduce overall costs.”

Servicing productivity has also improved over the past three years, according to the MBA Servicing Operations Study and Forum. Servicing systems are now in place, “which should lead to improved productivity, improved processes and lower costs,” Walsh said.

Another piece of good news for servicers: the most recent MBA National Delinquency Survey reports mortgage delinquencies in the fourth quarter at the lowest level in the history of the survey, dating back to the 1950s.

“Folks, this is about as good as it gets,” Walsh said. “It’s a pretty picture.”

The major factor in increases in delinquency rates now is not “life events,” such as employment changes, but instead natural disasters, as evidenced by events in 2017 and 2018. “It takes longer for FHA borrowers to recover from natural disasters, so we tend to see upticks in FHA delinquencies in areas hit by those disasters,” she said.

Walsh said even 90-day plus delinquencies are starting to see resolution. In some cases, she said, these delinquencies are in judicial states in which even they have reached the foreclosure stage; but she also noted that home price appreciation has raised a number of “underwater” homes back into equity.

“Even in judicial states, in just one quarter, we saw drops of 15 to 35 basis points,” Walsh said. “So, we are seeing a chipping away in these rates.”

Walsh said borrower sentiment toward home equity has appeared to have changed. While homeowners’ equity in real estate has risen to nearly $19 trillion, home equity debt outstanding has fallen steadily since 2008 to just $510 billion. “Tappable equity is at a record high, but HELOC utilization rates are down,” She said. “That’s the piece that has differentiated us pre-crisis and post-crisis,” she said.

Looking ahead, Walsh said servicers to expect a change in their relationship with customers. She noted customer retention for servicers continues to be low (17 percent), but is expected to improve in 2020.

“There is so much data and information available to you,” Walsh said. “You can use this data to predict customer behavior, gauge their loyalty, respond to complaints and cross-sell.”