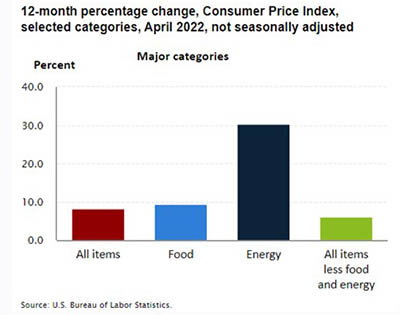 Increases in the indexes for shelter, food, airline fares and new vehicles led contributors to the seasonally adjusted all-items increase. The food index rose 0.9 percent over the month as the food at home index rose 1.0 percent. The energy index declined in April after rising in recent months. The index for gasoline fell 6.1 percent over the month, offsetting increases in the indexes for natural gas and electricity.

The index for all-items less food and energy rose 0.6 percent in April following a 0.3-percent advance in March. Along with indexes for shelter, airline fares and new vehicles, the indexes for medical care, recreation and household furnishings and operations all increased in April. The indexes for apparel, communication and used cars and trucks all declined over the month.

“Restoring price stability was never going to be an easy task,” said Sarah House, Senior Economist with Wells Fargo Economics, Charlotte, N.C. “April’s CPI data served as a stark reminder that the Fed has a long road ahead of it in bringing down inflation. lthough price growth showed signs of easing in April, inflation still came in stronger than expected.”

House noted although base effects are starting to help drive the year-over-year rates of inflation lower, that will no longer be the case come mid-summer. “With the underlying trend in inflation still well-above what the Fed considers desirable, another 50 basis point rate hike at the June 14-15 FOMC meeting seems all but assured, with further hikes of that magnitude highly likely to follow.”

“Has inflation peaked? Maybe,” said Odeta Kushi, Deputy Chief Economist with First American Financial Corp., Santa Ana, Calif. “This was the first drop in eight months, but April’s report shows the breadth of price increases in the economy which, alongside rising wages, indicates that inflation will likely remain very hot for some time. This report should not, and likely will not slow Fed tightening.”