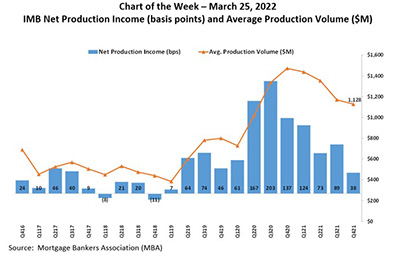 MBA released its latest Quarterly Performance Report for the fourth quarter last week. The total sample of 359 independent mortgage banks and mortgage subsidiaries of chartered banks earned an average pre-tax production profit of 38 basis points (or $1,099) on each loan they originated. This was down from the reported average net production income of 89 basis points (or $2,594) in the third quarter.

A combination of lower revenues and higher expenses contributed to the decrease in net production income in the final three months of last year. Revenues (fee income, net secondary marketing income and warehouse spread) decreased to 353 basis points, while expenses (commissions, compensation, occupancy, equipment, and other production expenses and corporate allocations) reached a study-high of $9,470 per loan. The average quarterly net production income, from the third quarter of 2008 to the most recent quarter, is 56 basis points.