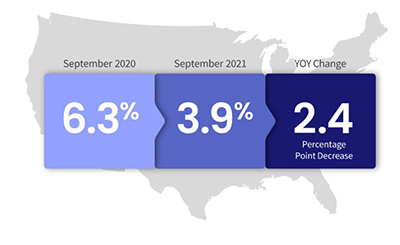 CoreLogic, Irvine, Calif., reported the nation’s overall delinquency rate declined for seventh consecutive month to its lowest level since the start of the coronavirus pandemic.

The company’s monthly Loan Performance Insights Report said as of October, 3.8% of all mortgages in the U.S. were in some stage of delinquency (30 days or more past due, including those in foreclosure), a 2.3-percentage point decrease from a year ago, when it was 6.1%.

•       Foreclosure Inventory Rate (the share of mortgages in some stage of the foreclosure process): 0.2%, down from 0.3% a year ago, the lowest foreclosure rate recorded since 1999.

“Economic recovery and loan modification have helped reduce the number of loans that were in serious delinquency by just over one million from the August 2021 peak,” said CoreLogic Chief Economist Frank Nothaft. “Nonetheless, there were about one-half million more loans in serious delinquency in October than at the start of the pandemic in March 2020.”

Nothaft noted employment has played a big factor. After more than a year of trying conditions for borrowers, data from the Bureau of Labor Statistics showed by October 2021 an estimated 82% of the jobs lost in March and April 2020 were recovered, which translates to roughly 18.2 million Americans back at work. He said the combination of significant job market improvement, home equity increases and federal assistance programs have helped overall delinquency rates decline.

“Improving economic security and the benefits of disciplined underwriting practices over the past decade is helping reduce or avoid mortgage delinquencies,” said Frank Martell, president and CEO of CoreLogic. “We expect to see delinquency trend down over the balance of this year as the economy continues to rebound from the pandemic, employment grows and high levels of fiscal and monetary stimulus continues.”