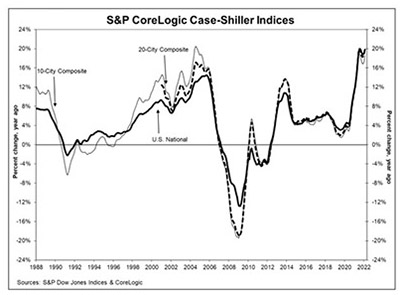 Two home price indices on Tuesday showed no slowing in home price appreciation, flirting at a near-20 percent annual rate.

The S&P CoreLogic Case-Shiller U.S. National Home Price NSA Index reported a 19.8% annual gain in February—the third-highest in the Index’s history—up from 19.1% in January. The 10-City Composite annual increase came in at 18.6%, up from 17.3% in January; the 20-City Composite posted a 20.2% year-over-year gain, up from 18.9% the previous month.

Phoenix led with a 32.9% year-over-year price increase, followed by Tampa at 32.6% and Miami at 29.7%. All 20 cities reported higher price increases in the year ending February from January.

“U.S. home prices continued to advance at a very rapid pace in February,” said Craig J. Lazzara, Managing Director with S&P DJI. “That level of price growth suggests broad strength in the housing market, which is exactly what we continue to observe.”

However, Lazzara noted the macroeconomic environment is evolving rapidly and may not support extraordinary home price growth for much longer. “The post-COVID resumption of general economic activity has stoked inflation, and the Federal Reserve has begun to increase interest rates in response,” he said. “We may soon begin to see the impact of increasing mortgage rates on home prices.”

“While anticipation of mortgage rate increases pulled many buyers in ahead of the spring home buying season, strength in the higher priced segments of the market also suggests that buyers are seeing additional value in homes as a hedge against inflation,” said Selma Hepp, Deputy Chief Economist with CoreLogic, Irvine, Calif.

The report said as of February, average home prices for the MSAs within the 10-City and 20-City Composites are exceeding their winter 2007 levels.

“House prices rose to set a new historical record in February,” said Will Doerner, Supervisory Economist in FHFA’s Division of Research and Statistics. “Acceleration approached twice the monthly rate as seen a year ago. Housing prices continue to rise owing in part to supply constraints.”