RMQA21: Pandemic Saw Changes in Consumer Behavior—Most of it Good 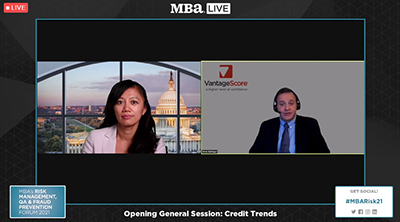 WASHINGTON, D.C.—The economy continued to improve in 2021, fueled by record consumer savings and strong gains in employment, despite the coronavirus pandemic that could have otherwise ground it to a halt, said Emre Sahingur, Senior Vice President of Predictive Analytics with VantageScore Solutions LLC, Stamford, Conn.

Speaking by video here at the Mortgage Bankers Association’s Risk Management, QA and Fraud Prevention Forum, Sahingur said adjustments by businesses and consumers, along with government stimulus programs, gave the economy an unexpected resilience that led to a faster economic recovery in 2021 and a solid foundation for further recovery.

“Right now, as we sit here in September of 2021 and looking back, it seems like things have gotten significantly better than what we were anticipating them to be,” Sahingur said.

When the pandemic first hit full-force, Sahingur said, analysts feared the worst-case scenarios. “At that time, if you recall, there were concerns about credit losses going much, much higher; lenders taking actions to control for what’s coming potentially down the pike—tightening underwriting, building up reserves and really and having a fair amount of concern with respect to what would be the effects of the pandemic on the health of the consumer credit,” he said.

Since that time, Sahingur said, “we started monitoring and reporting on the health of consumer credit, particularly looking at credit scores—trends in the credit scores and the drivers of those trends on a pretty regular basis. At that time, the outlook was that consumer credit was going to take a hit; credit scores were going to be adversely affected with potential challenges. But as we all know, there has been a significant amount of coordinated efforts to try to help consumers to deal with the effects of the pandemic. A number of different stimulus programs; unemployment benefits at the state and local level; massive borrower recommendation programs and other things were deployed to help with the situation.”

While there remains some uncertainty about the future, and what new COVOD variants could cause and what will happen with inflation rates and other economic situations, Sahingur said “the general feeling is that things ae looking better and lenders are feeling more positive about their prospects.”

One surprising finding during the pandemic, Sahingur said, was that overall credit scores actually continued to rise—between January 2020 and this past August, average credit scores across all tiers—subprime, near-prime, prime and super-prime—rose on average by 10 points.

“And it’s also observable that consumers in the lower buckets have seen the larger benefits,” Sahingur said. “Consumers who were in the subprime ranges have actually seen cumulative score increases of up to 30 points during this period. What we’ve observed is that the scores have started to plateau beginning with the spring months of this year as the economy has opened up and as perhaps accommodations are falling off. We are seeing some settling of the credit scores. But it was interesting to observe that consumers in the lower end of the distribution, who typically have challenges with payment performance and other credit-related issues have seen more of the benefits from accommodations, as well as some of the changes that occurred in the reporting of delinquencies through the CARES Act.”

Additionally, Sahingur noted younger consumers tend to have lower scores compared to the national average. Nearly 50 percent of Gen Z and Millennials are below prime levels, while up the age distribution again, one sees increasingly prime and super-prime representation.

“When we looked at Gen Z and Millennials, they tend to significantly lag the national average,” Sahingur said. “As you go up in the age spectrum you will see higher and higher scores. There are a number of factors that explains that: Length of histories is certainly there, but in terms of credit usage and level of risk, we do see that there are some differences across these different age groups.

Sahingur noted, however, that “credit scores are just summary measures, and credit scores reflect and react to what is reported on a consumers’ credit file. And as that changes, the scores will rapidly change. There are many different credit scoring models out there, but there are some common factors that drive the movement in much of these credit scores; there’s a few dimensions, namely, your payment history; your reusage of credit; your balances; your length of credit history; your debt and depth of your credit file in another way, and your new credit activity will all play a factor in how your credit score looks.”

Sahingur said delinquencies, surprisingly, have remained near historic lows throughout the length of the pandemic. Accommodations and forbearance by lenders and servicers—some of it mandated by government—have mitigated circumstances.

“We have seen unprecedented levels of accommodations being reported on the credit files, and that creates a lot of questions in terms of what the implications are,” Sahingur said. “We’ve seen some gradual decline after a peak in the mid-May/June period of 2020, however, there’s still a fair amount of accommodations to pass through the system, and we’ll likely see that play out in later 2021 and early 2022.”

Another big part is what’s happening involves balances and utilizations. “We’ve all heard the stories with respect to how spending patterns changed with the onset of the pandemic—the economy shutting down, not traveling or going out, and I think there’s been a significant change in purchase behavior,” Sahingur said. “And we’ve also seen a significant change in credit usage. What we’ve also seen is that as stimulus payments came in, consumers were pretty conservative in what they wanted to do with those additional funds, and we’ve seen a good amount of that actually being put against paying down outstanding balances.”

On average, Sahingur said, consumer credit balances have seen a pretty significant drop compared to pre-pandemic levels. “They are still low but in the last several months as the economy started to open up and as we started—people moving about and traveling and starting their normal lives, we are seeing a change back to normal levels of activity,” he said. “But it is still, in comparative terms, significantly lower level of balances that we were observing.”

Utilization is highly correlated with risk., Sahingur said, “and we’ve seen that as utilization levels came down with credit cards, not surprisingly, that was also reflected in the credit scores for these consumers.” He added lenders have taken some selective measures to manage their risks by offering credit limits.

New account activity, Sahingur said, is one area where mortgages have seen a lot of movement. “The story has been quite different for mortgages, given the historically low interest rates, high demand for purchasing a home,” he said. Much of that activity, he noted, has been in the prime and super-prime tiers and less so with subprime and near-prime. “The new account activity for mortgages have actually done quite well and continue to do well in that space,” he said.

The final result from the pandemic, Sahingur said, is behavioral. “We do certainly see a behavioral shift; and it may be that some of this has been forced on the consumer,” he said. “Spending behavior really changed; we’ve seen a move away from credit and more to cash or debit, perhaps, and that’s reflective of the more conservative behavior on the consumers’ part. We’ve seen an increased effort to pay down existing debt, which is a good thing—consumers have become more conservative.”

But one remaining issue is the nature of credit scores themselves, Sahingur said, noting more than 48 million Americans are unreported or are “invisible” because of traditional credit reporting criteria.

“When you look at different consumer segments—minority groups, renters versus homeowners, consumers who are living in socioeconomic conditions that are more adverse—they, on average, tend to fare worse with credit scores, not surprisingly,” Sahingur said. “We also see that a larger percentage of these consumers do not get a credit score by some other conventional scoring algorithms…we see a strong correlation between income and minority homeownership and general access to financial services and whether or not these consumers are able to receive a score through more conventional methods.”

Newer models, Sahingur said, take more data points into account and present a more accurate picture of a person’s credit, as well as reflect a broader representation of populations. “There is actually an opportunity to provide an accurate, more fair representation of risk for these consumers that for many lenders would allow them to assess and identify potentially creditworthy borrowers,” he said.