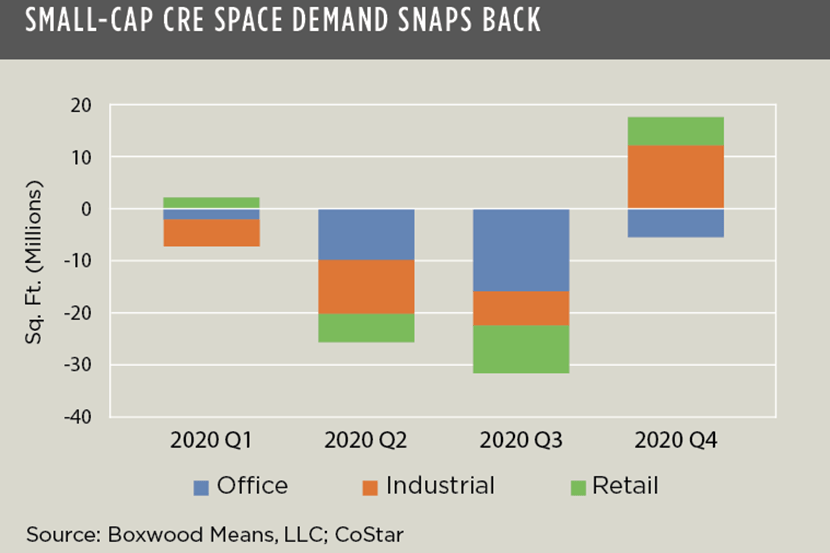 Fuchs noted recent National Federation of Independent Business research found small business owners do not anticipate better business conditions over the next six months. “But the recent reality is that small firms are hiring workers and signing leases,” he said. “And the new administration’s commitment to federal COVID relief and stimulus and plans to revive the economy and boost vaccine manufacture and distribution will all have a positive impact for the Main Street economy and commercial real estate.”

Fuchs said absorption across the small-cap industrial, retail and office sectors “sprang into positive territory” during the fourth quarter, halting a three consecutive quarter slide in demand not seen since 2009.

But the struggling office sector suffered another setback with net occupancy losses equaling 5.2 million square feet, culminating in a total net occupancy loss of 31.7 million square feet for the year, the biggest annual deficit since at least 2006. When sublease office space is combined with direct space for lease, the total office availability rate of 9.6 percent is the highest seen in four years. “Nationally, the office sector is clearly shaping up to be the laggard, behind retail, in leasing velocity,” Fuchs said.

All things considered, the small-cap CRE space and investment markets have proven to be “surprisingly resilient,” Fuchs said. “That said, COVID cases and deaths are soaring since the 2020 holiday season and, coupled with the tardy rollout of the vaccine to date, it’s anybody’s guess what the trajectory of Main Street economic recovery and growth will look like in the immediate months ahead and as the new administration in Washington, D.C gets to work.”