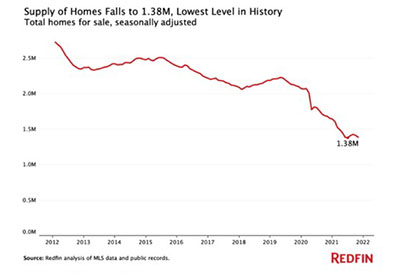 The coronavirus pandemic and the resulting surge in remote work have changed where, when, why and how people buy homes, reported Redfin, Seattle, resulting in nearly a dozen housing market records in the past year.

“The ongoing pandemic, including its seismic effect on the U.S. economy and the way Americans live and work, has made 2021’s housing market anything but typical,” said Redfin Chief Economist Daryl Fairweather. “Remote work, low mortgage rates, a shortage of building materials and wealth inequality that has allowed an influx of affluent Americans to buy vacation homes, to name just a few factors, have come together to create a historic year for real estate. Buyers paid more for homes, bought sooner than they planned, searched outside their hometowns or all of the above. This year’s frenzied housing market has been one for the books—but it may become more balanced in 2022.”