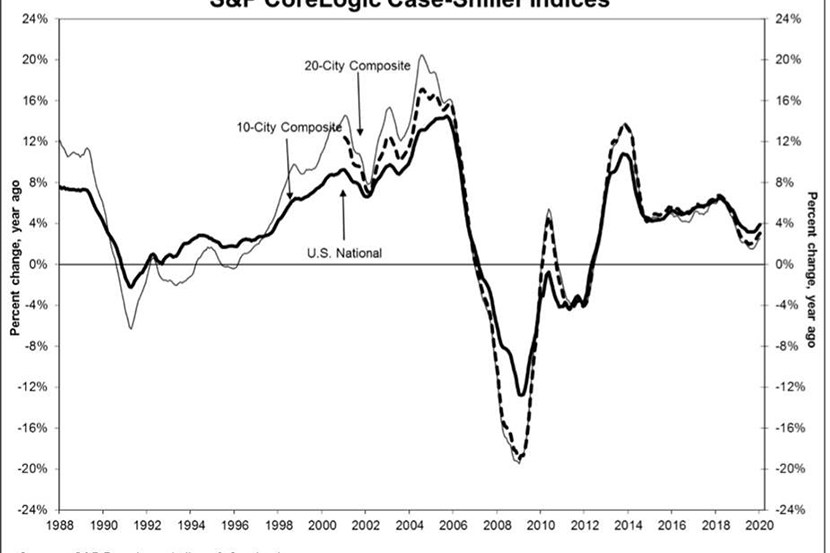 In a separate report, First American Financial Corp., Santa Ana, Calif., said its Real House Price Index showed despite some inconsistencies, the housing market is in a much-better position during this economic downturn than during the Great Recession.

“The trend of stable growth established in 2019 continued into the first month of the new year,” said Craig J. Lazzara, Managing Director and Global Head of Index Investment Strategy with S&P Dow Jones Indices. “It is important to bear in mind that today’s report covers real estate transactions closed during the month of January. The COVID-19 pandemic did not begin to take hold in the U.S. until late February, and thus whatever impact it will have on housing prices is not reflected in today’s data.”

Frank Nothaft, chief economist with CoreLogic, Irvine, Calif., said the indexes show a housing market with solid momentum prior to the COVID-19 pandemic. “Home buyer demand was supported by low mortgage rates and rising income, leading to a further rise in home prices. The novel coronavirus has placed a cloud over the spring buying season, and home sales will likely be much lower than had previously been expected,” he said.

Meanwhile, First American said its Real House Price Index showed house prices increased by 0.1 percent between December and January, but declined by 3.8 percent from a year ago.

“As we are all too aware, the coronavirus outbreak has taken hold of the domestic and global economy,” said First American Chief Economist Mark Fleming. “The housing market is not immune to its impact but may be in a better position than many believe. Recent data shows that weekly unemployment claims soared to a record, which will, in turn, work to depress household incomes and consumer confidence. While mortgage rates have fallen due to the economic uncertainty, potential home buyers that are confined to their homes cannot necessarily take advantage of the affordability boost.

Fleming said right now, many homeowners have long memories. “Many still bear scars from the Great Recession and may expect the housing market to follow a similar trajectory in response to the coronavirus outbreak,” he said. “But there are distinct differences that indicate the housing market may follow a much different path. While housing led the recession in 2008-2009, this time it may be poised to bring us out of it.”

Fleming noted the current housing market is not overvalued, and is underbuilt. Additional, home equity is at historical highs. “The housing crisis during the Great Recession was fueled heavily by the fact that job losses were paired with a significant share of homeowners who had little, if any, equity in their homes,” he said. “Homeowners today have very high levels of tappable home equity, providing a cushion to withstand potential price declines.”

Still, Fleming said the industry will feel the sting from the current economic shutdown. “Of course, the housing market will not go unscathed, as consumer confidence and a strong labor market are essential in the decision to purchase a home,” he said. “Yet, this time, housing is a casualty of a public health crisis turned economic, not the cause of an economic crisis.”