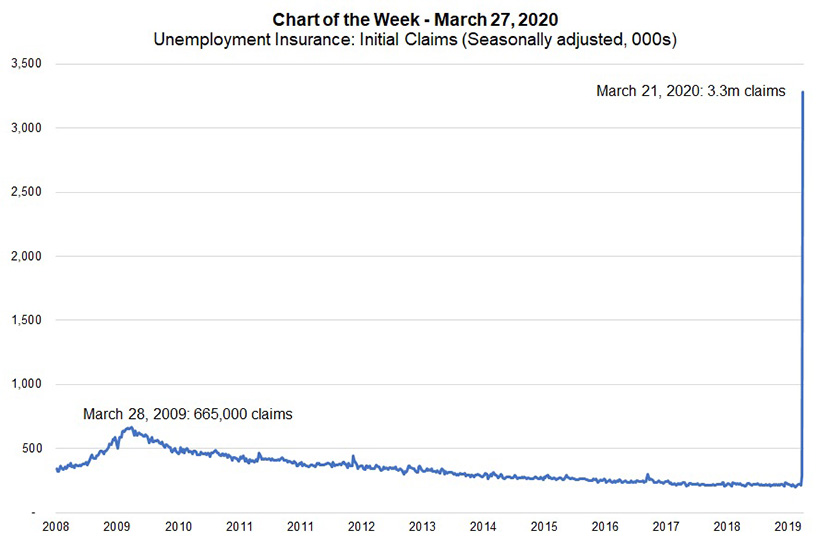 Last week provided our first indication of just how severe the shutdown of the U.S. economy could be, as Americans combat the ongoing spread of the coronavirus.

With respect to the job market, the Labor Department announced that almost 3.3 million Americans filed for unemployment last week – an increase of three million over the course of one week.

This level of initial claims not only broke the previous record of 695,000 dating back to 1982, it also dwarfed the 660,000 weekly levels seen in March 2009 during the Great Recession. 1982 and 2009 were periods where the unemployment rate was in the range of 9-10 percent, compared to the 3.5 percent rate most recently in February of this year.

The unemployment rate will undoubtedly spike over the next few months. These layoffs will lead to real hardships for millions of households across the country. Mortgage servicers are already hearing from a substantial number of homeowners who are concerned about their ability to make their mortgage payments on time. The mortgage industry is ready and willing to help through the use of established forbearance programs, allowing borrowers who have lost their jobs or been furloughed as a result of the virus the ability to delay their payments for at least six months. However, the unprecedented and unexpected wave of forbearance requests will place a significant strain on mortgage servicers both in terms of liquidity and operational capacity.