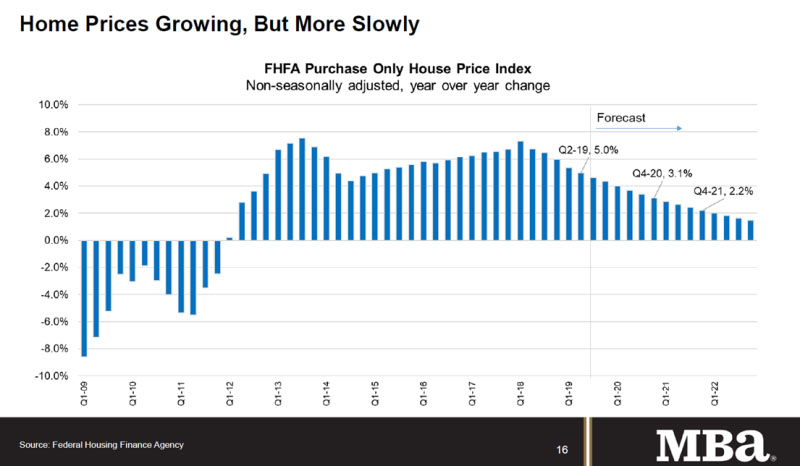 Mortgage delinquency rates for loans on one-to-four-unit residential properties in the fourth quarter fell to the lowest level since the Mortgage Bankers Association began tracking such data.

The MBA National Delinquency Survey reported the delinquency rate for one-to-four unit residential properties in the fourth quarter fell to a seasonally adjusted rate of 3.77 percent of all loans outstanding, down by 20 basis points from the third quarter and by 29 basis points from one year ago. The percentage of loans on which foreclosure actions were started in the fourth quarter remained unchanged at 0.21 percent.

“The mortgage delinquency rate in the final three months of 2019 fell to its lowest level since the current survey series began in 1979,” said Marina Walsh, MBA Vice President of Industry Analysis. “Mortgage delinquencies track closely to the U.S. unemployment rate, and with unemployment at historic lows, it’s no surprise to see so many households paying their mortgage on time.”

Walsh noted signs of healthy conditions were seen in other parts of the survey. The foreclosure inventory rate–the percentage of loans in the foreclosure process—fell to its lowest level since 1985. Even states with lengthier judicial processes continued to chip away at their foreclosure inventories, “and it also appears that with home-price appreciation and equity accumulation, distressed borrowers have had alternative options to foreclosure,” she said.

States with the largest decreases in their foreclosure inventory rate over the previous quarter include New York (27 basis points); Maine (27 bps); Hawaii (17 bps); New Jersey (15 bps); New Mexico (14 bps); and Vermont (14 bps). All of these states except Hawaii have judicial foreclosure processes; Hawaii has both judicial and non-judicial processes.