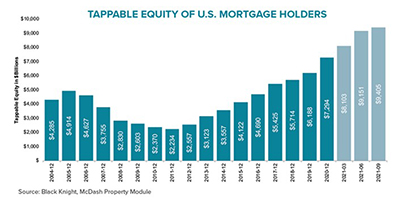 Black Knight, Jacksonville, Fla., said tappable equity – the amount available for homeowners to access while retaining at least 20% equity in their homes – rose by 32% over the past year, an increase of $2.3 trillion over the past year.

The company’s monthly Mortgage Monitor report said skyrocketing home values over the past 18 months have increased the average mortgage holder’s equity stake by $53,000, for an average of just under $178,000 in available equity per homeowner. Rising equity stakes have pushed the average homeowner’s combined mortgage debt down to just 45.2% of their home’s value, the lowest average combined loan-to-value ratio on record.

“Home price growth in the third quarter – while less than half that of Q2’s history-making rate – added more than $250 billion to Americans’ already record levels of tappable equity,” Graboske said. “The aggregate total of $9.4 trillion is up an astonishing 32% from the same time last year and nearly 90% higher than the pre-Great Recession peak in 2006.”

Graboske noted the $70 billion extracted from the market via cash-out refis in the third quarter represents just 0.8% of the available tappable equity at the start of the quarter; that’s less than a third of the rate at which people were pulling cash out of their homes at the peak of such activity in 2005.

The report also said the monthly mortgage payment (principal and interest) to purchase the average-priced home with 20% down has jumped by nearly 25% since the start of the year. Black Knight said factoring in incomes as well as prices across the country, it now requires 22.4% of the median income to purchase the average-priced home with 20% down and a 30-year mortgage. This is the largest share of income required for a home purchase since late 2018, when interest rates were near 5%, but still far below the 34%+ payment-to-income ratio reached in 2006.

“A ratio higher than 20.5% in recent years has correlated with a slowdown in the rate of home price growth, but today’s inventory shortages continue to put upward pressure on prices,” Graboske said. The slight improvements seen in for-sale listings this summer have begun to plateau, leaving the market with a 54% deficit in for-sale properties compared to 2017-2019 averages. Even if home prices held steady, a rise in 30-year rates to 3.5% would result in the tightest affordability since 2009. At 4%, payment-to-income ratios would rise above the 1995-2003 market average, and at 5% would drive affordability to its worst level on record outside of the 2004-2008 bubble.