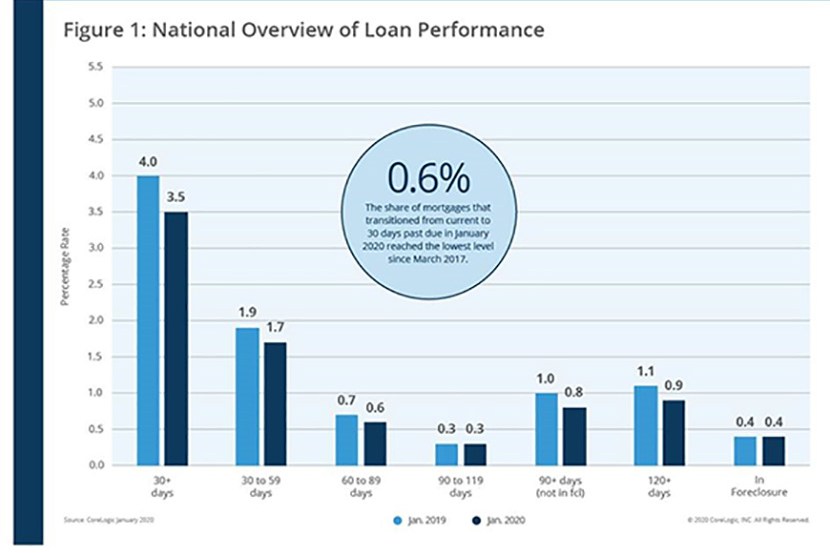 CoreLogic, Irvine, Calif., reported 3.5% of mortgages in some stage of delinquency in January, an 0.5 percentage point decline in the overall delinquency rate from a year ago.

The company’s monthly Loan Performance Insights Report said this marked 25 consecutive months of annual declines and was the lowest for a January in more than 20 years. The foreclosure inventory rate was unchanged at 0.4%, tied the prior 14 months as the lowest for any month since at least January 1999.

CoreLogic Chief Economist Frank Nothaft noted the mortgage market experienced a strong year of improvement in loan performance during 2019, which carried over into the first month of 2020. However, mounting job losses since the COVID-19 pandemic was declared a national emergency has raised the possibility of many borrowers falling behind on their mortgage payments in coming months.

“Home loan delinquency and foreclosure rates were the lowest in a generation before the COVID-19 pandemic hit,” Nothaft said. “Recession-induced job losses will fuel delinquencies. However, wide-spread foreclosures across America will likely be averted because of the home equity buffer that homeowners have and the available forbearance programs.”

Nothaft added the CoreLogic Home Equity Report found that at the start of 2020, homeowners with a mortgage also had an average of $177,000 in home equity.

“After some initial cushioning from equity buffers, lower mortgage interest costs and government support and forbearance programs, we expect delinquency rates to jump significantly throughout the year as the economic toll from COVID-19 becomes more evident,” said Frank Martell, President and CEO of CoreLogic. “It is likely that areas of the country that have local economies driven by energy, transportation and media and entertainment will lead the way in delinquencies. The ultimate extent of the higher delinquencies will depend on how quickly the broader economy opens up again and employment levels rebound – both of these factors are uncertain at this time.”