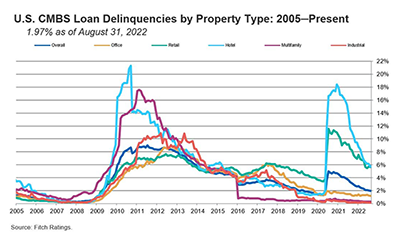 CMBS resolutions totaled $1.1 billion in August, up from $685 million in July, led by retail and hotel loans, Fitch reported. New 60-plus day delinquencies fell to $657 million from $683 million in July.

“Rising interest rates this year are narrowing refinancing options for maturing CRE loans,” Moody’s said in Rising Rates Sill Slow Conduit Loan Refinancings. It noted only 73.5% of existing loans refinanced as their maturity approached, an 11.2 percentage point decrease from the prior quarter and the largest drop since the pandemic’s onset.

“[But] lenders are refinancing loans for properties with strong recovery trajectories,” Moody’s said. In the second quarter, loans that refinanced had an average Debt Service Coverage Ratio greater than 1.6X for most property types, with the hotel market’s average DSCR just over 1X. At least one loan with an “underperforming” DSCR below 1X refinanced in every major property type during the quarter, indicating that refinancing conditions have remained strong, the report noted.