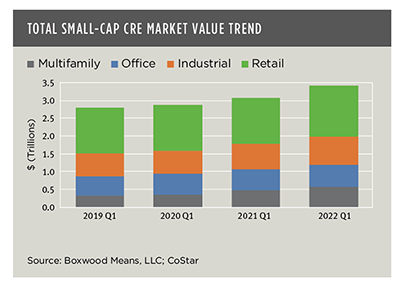 In a new report, Boxwood Means analyzed market valuations for the four principal property types. It found retail accounted for the largest component, totaling $1.4 trillion, followed by industrial assets at $0.8 trillion, then office and multifamily at $0.6 trillion each.

Fuchs noted the multifamily segment recorded the greatest expansion in asset size over the past three years with an “outsized” 21.9 percent compound annual growth rate, nearly three times greater than the 7.5 percent average annual rate of return for next-best performer industrial. He said retail and office followed with yields of roughly 4 percent each. The overall market’s CAGR averaged 7.1 percent across all four sectors.

“It comes as no surprise that the returns for multifamily and industrial assets outpaced the other two property types,” Fuchs said. “After all, the small-cap multifamily sector has advanced at a feverish pace for years with record-setting demand, habitual supply scarcity and solid rent growth. Similarly, industrial rents have soared and vacancies have dwindled with a revival in U.S. manufacturing as well as with seemingly boundless demand for warehouse facilities of all sizes by logistics and e-commerce businesses.”

The report said the overall sustained growth in market asset values speaks to the stability of small-cap real estate assets despite some difficult economic, social and public health conditions over the past couple of years. “Naturally, this market’s resilience hinges primarily on the nation’s millions of small businesses that, by dint of their stamina, diversity and entrepreneurial spirit, ultimately keep the U.S. economic engine moving forward,” Boxwood said. “There may be some new warning signs emerging from economic reports of late, but the durability of the ecosystem linking small-cap commercial real estate and small business is a lodestar for investors and lenders in this massive space.”