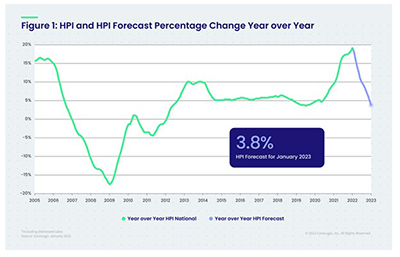 For the second consecutive month Naples, Fla. (38.9%) and Punta Gorda, Fla. (38.3%) logged the highest year-over-year home price increases. At the state level, the Mountain West and Southern regions continued to dominate the top three spots for national home price growth, with Arizona leading at 28.3%. Florida ranking second at 27.9% and Utah in third at 25.2%.

“In December and January, for-sale inventory continued to be the lowest we have seen in a generation,” said CoreLogic Chief Economist Frank Nothaft. “Buyers have continued to bid prices up for the limited supply on the market. However, the rise in mortgage rates since January further eroded buyer affordability and is expected to slow price gains in coming months.”

Nothaft said consumers looking to purchase a home have remained optimistic moving into the new year, with more expecting to buy over the next six months as rapid home price appreciation is forecasted to slow. Despite market and economic challenges such as low inventory, continued buyer competition and declining affordability, potential buyers are ready to move while mortgage rates remain relatively low.

The company’s HPI Forecast projects home price gains to slow to a 3.8% annual increase by January 2023.