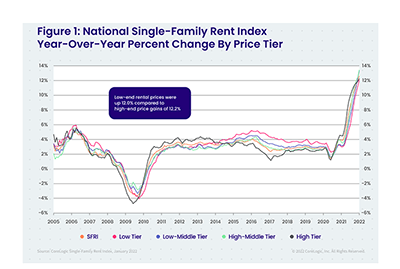 Boesel noted the robust price growth was partially due to a continuing shortage of available rental properties. In addition, the cost of purchasing a home rose by 19 percent on an annual basis in January, forcing many would-be homebuyers to keep renting. The year-over-year national rent price growth more than tripled the gain recorded in January 2021 and more than quadrupled the increase from January 2020.

Among the 20 largest metro areas, Miami once again had the highest year-over-year increase in single-family rents in January 2022 at 38.6 percent. Orlando and Phoenix logged the second- and third-highest gains at 19.9 percent and 18.9 percent respectively, reflecting population gains seen in warmer areas of the country. The Washington, D.C. area recorded the lowest annual rent price growth with 5.6 percent in January.

“Differences in rent growth by property type emerged after the pandemic as renters sought out standalone properties in lower-density areas,” the report said. “This trend drove an acceleration in rent growth for detached rentals in 2021 while the gains for [multifamily attached] rentals were more moderate. However, as rental inventory remains slim, the gap between attached and detached rental growth started to close last fall.”