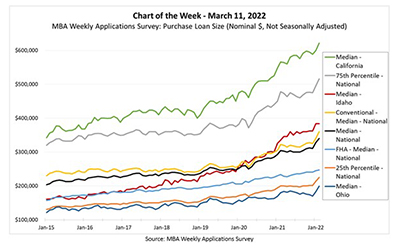 The Federal Housing Finance Agency’s Purchase-Only House Price Index increased by 17.5% from fourth quarter 2020, and it grew by more than 27% in Idaho, Utah and Arizona. There have been various explanations given for the record-setting appreciation in recent months—mainly the imbalance between housing demand and supply. In addition, some housing analysts have explained the strong appreciation in locations where people migrated to during the pandemic as “location arbitrage”—where movers could take advantage of the vastly different home prices across metros and regions.

With increasing home prices, it is instructive to understand how home purchase mortgage origination amounts have increased. In this week’s MBA Chart of the Week, we examine how the loan size for fixed-rate 30-year purchase mortgage applications has changed since 2015 using MBA’s Weekly Applications Survey data.

The final series we show is for Idaho (red “transversal” line). The median loan size in Idaho has increased, on average, by 13.2% per annum over the seven years ending in 2021 (versus 7.0% nationally). It increased by 17.8% in 2021 but was flat between January and February (when the national median increased 3.7% month-on-month).