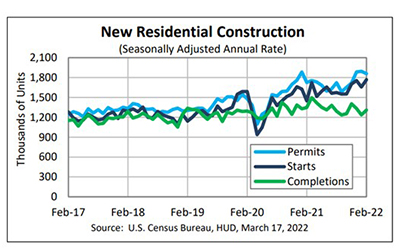 These days, is there really a spring home buying season? Especially when every month feels like buyers are knocking down every available door? Even, so, the New Residential Construction report from HUD and the Census Bureau portends what could be an even busier period for the housing market.

“The 1.77 million-unit pace is the strongest pace of new residential construction since the end of 2006,” said Mark Vitner, Senior Economist with Wells Fargo Economics, Charlotte, N.C. “The stepped-up pace of production was mostly broad-based, with single-family and multifamily starts rising by 5.7% and 9.3%, respectively.”

Vitner noted the construction industry continues to contend with supply-side challenges posed by pervasive shortages of building materials and labor, which has resulted in long delays and higher costs. However, “a solid increase in completions shows builders are finding ways to navigate around supply constraints.”

“Given that homebuilders have continued to struggle to work through their order backlogs in light of materials and labor scarcity issues, there’s still strong near-term support for new housing construction,” said Doug Duncan, Chief Economist with Fannie Mae, Washington, D.C. “Meanwhile, multifamily starts continued to impress as they rose above our expectations. This is more evidence of the ongoing interest in multifamily housing development due to strong rent gains and low vacancy rates.”

“More groundbreaking is welcome news for a supply starved housing market,” Kushi said. “It’s great to see both housing starts and completions up. Permits, a leading indicator of future starts, is down modestly month over month as builders grow concerned about affordability challenges ahead as rates continue to rise. But record low existing-home inventory and millennial demand is supportive of new construction. Of course, builders face persistent headwinds that make it difficult to bring more new homes to the market.”

Kushi noted while builders are continuing to push to meet demand, “supply-side headwinds slow the home-building momentum at a time when the housing market desperately needs more supply relief.”