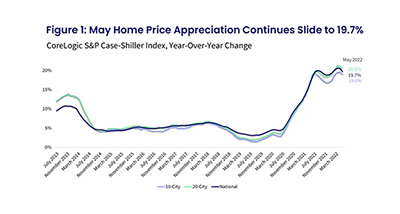 House prices rose nationwide in May, but at a slower pace than in April, two home price indices reported on Tuesday.

“House prices continued to rise in May, but at a slower pace” said Will Doerner, Supervisory Economist in FHFA’s Division of Research and Statistics. “Since peaking in February, price appreciation has moderated slightly. Price growth continues to remain above historical levels, supported by the low inventory of properties for sale.”

The CoreLogic S&P Case-Shiller Index said signs of slowing homebuyer demand “are spreading wider across markets and are reflected in slowing price appreciation.” The CoreLogic S&P Case-Shiller Index posted a 19.7% year-over-year increase in May, down from a 20.6% gain in April, confirming a tipping point after strong reacceleration in home price growth in the early months of 2022.

The Case-Shiller report noted further indication of slowing price growth in the deceleration of the non-seasonally adjusted month-to-month index, which slowed to 1.5% in May from a 2.6% increase in March and a 2.3% gain in April.

“We’ve noted previously that mortgage financing has become more expensive as the Federal Reserve ratchets up interest rates, a process that was ongoing as our May data were gathered,” said Craig J. Lazzara, Managing Director at S&P DJI. “Accordingly, a more-challenging macroeconomic environment may not support extraordinary home price growth for much longer.”

While higher mortgage rates and concerns about a looming recession are taking a toll on buyer demand, overall sales activity through the end of May still held relatively steady compared with 2021, the CoreLogic S&P Case-Shiller report said. “June appeared to be a tipping point, with a more significant pullback in buyer interest, which will be reflected in next month’s data.”

Housing markets have moved away from the “overheated” conditions seen in the spring as demand dipped due to higher mortgage costs and fears of a looming recession, the Case-Shiller report said. “Most of the weakening demand appears to be in costly West Coast markets that have seen considerable price growth over the last two years, while more affordable, warmer regions remain on buyers’ radars,” the report said. “Also, based on many other market indicators, buyers still face plenty of competition–particularly for attractive properties–including multiple offers and final sales prices higher than asking prices. Thus, while the market is moving away from sellers, a balanced market remains far off. Pressure on home price growth will persist and is forecast to remain in the mid-teen percentage points through the end of the year.”