Record 1/3 of Houses for Sale Are New Construction 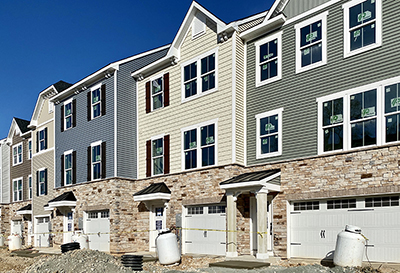 The share of newly built single-family homes on the market is at a record high as builders try to keep up with surging homebuyer demand fueled by low mortgage rates, low inventory and remote work, said Redfin, Seattle.

Redfin reported more than one-third (34.1%) of U.S. single-family homes for sale in December were new construction, up from 25.4% a year earlier to the highest share on record.

The report noted newly built homes have taken up an increasing portion of U.S. housing inventory over the last 10 years, with a major acceleration in mid-2020 after the pandemic began. Homebuilders have been busy trying to make up for the lack of existing homes on the market and keep up with high demand. Overall inventory dropped to a record low in December. Inventory of existing homes fell 14.2% year over year in December, and there was a record-low 1.8 months of supply. For new homes, there was 6 months of supply and inventory was up 34.8%.

As the share of homes for sale that are newly built has edged up, the share of home sales that are new builds has remained relatively consistent, at 11%. This dichotomy is another indicator that homebuyer demand is far outpacing supply, du in part to low mortgage rates, the prevalence of remote work and the reluctance of some homeowners to refinance or remodel instead of selling.

“A lot of pre-owned homes are being listed, but they are just selling off so quickly—typically in a matter of days—while new homes take longer to sell,” said Redfin Economist Sheharyar Bokhari. “So as a homebuyer, you’re increasingly likely to see new builds when you look up homes for sale in your target area.”

In Houston, 39.5% of for-sale homes were newly built in the fourth quarter, the largest share of the 50 metros analyzed, followed by Minneapolis (38.3%) and San Antonio (37.5%). Texas metros top this list because they typically have more land to build new homes on and relatively lenient construction regulations.

On the other end of the spectrum, three California metros had the smallest shares of new-construction inventory. In San Diego, 3.1% of for-sale homes were newly built, followed by Anaheim (3.8%) and Los Angeles (4.4%). California has a lack of vacant land and less space zoned for housing development.

Redfin said the uptick in building permits at the end of last year is a sign that supply and sales of newly built homes will continue to rise in 2022. Builders are betting demand from buyers will continue in the coming year as permanent remote work policies allow more people to move. “More new homes in the pipeline should help boost the overall supply of for-sale homes,” the report said.