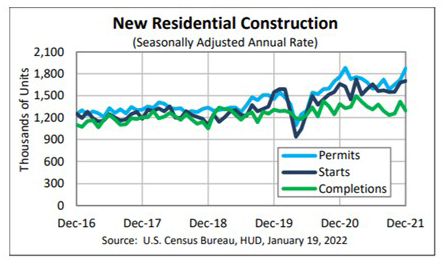 Housing starts posted a modest increase in December, HUD and the Census Bureau reported Wednesday, and jumped by nearly 16 percent from a year ago.

Kushi noted housing demand has outstripped supply since 2009. “Builders are entering 2022 with backlogs they are having a hard time completing due to material and labor shortages,” she said. “The shortage of skilled labor, materials and lots, are headwinds to increasing the pace of new construction. The good news in the December housing starts report is the number of single-family homes permitted, but not started declined to its lowest level since April 2021, but remains elevated compared to pre-pandemic.”

Mark Vitner, Senior Economist with Wells Fargo Economics, Charlotte, N.C., said milder than usual weather allowed more construction to take place in what is normally a seasonally slow month. “Home building finished 2021 on a high note and appears to have strong momentum headed into the new year,” he said. “That marks the best year for single-family starts since 2006. Multifamily starts rose 21.3% this past year to 472,000 units, marking their best year since 1987.”

“It’s encouraging that single-family home completions rose for the second continuous month to the highest pace since April 2021 after treading water for most of last year,” said Doug Duncan, Chief Economist with Fannie Mae, Washington, D.C. “We anticipate that the combination of more new homes being completed and higher mortgage rates weighing on purchase demand will begin to bring more balance between supply and demand in the coming quarters, coinciding with our forecast of decelerating home price growth for 2022.”