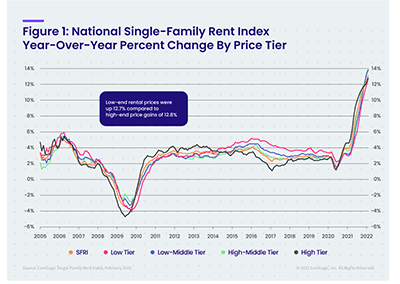 Warmer areas of the country again posted the largest price hikes, with rents in Miami up nearly 40 percent from a year ago. A shortage of available rentals is contributing to the prolonged run-up in price growth, as is the low U.S. unemployment rate, the CoreLogic Single-Family Rent Index report said. Robust home price increases–up 20 percent year-over-year in February–likely also contribute to more Americans renting rather than buying, the report noted.

Molly Boesel, Principal Economist with CoreLogic, said single-family rents rose at more than three times the rate from a year earlier and more than four times the pre-pandemic rate. “Strong employment and low supply have pushed single-family rental vacancy rates to low levels and have contributed to the high growth in rents,” she said.

Among the 20 largest metro areas, Miami again had the highest year-over-year increase in single-family rents in February at 39.5 percent. Orlando and Phoenix logged the second- and third-highest gains at 22.2 percent and 18.9 percent respectively, reflecting an influx of Americans migrating to Sun Belt states. The Washington, D.C. area and St. Louis recorded the lowest annual rent price growth, both at 6.5 percent in February.

“Investors are also making it more difficult for local families to buy houses,” the article said, noting some neighborhood groups sometimes cap the number of homes in a particular neighborhood that can be rented or require a board approve all rental tenants.