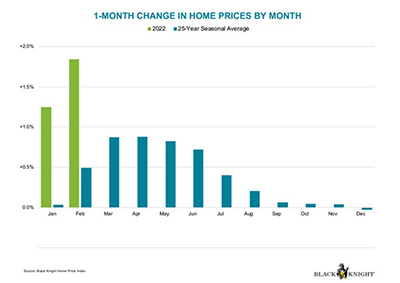 Black Knight said the average home has now increased in value by more than 34% since February 2020, with appreciation continuing to reaccelerate after a brief slowdown last fall.

“After a brief cooling last fall, appreciation has been reaccelerating for the last four months,” said Black Knight Data & Analytics President Ben Graboske. “Three-quarters of the 100 largest U.S. markets – all 100 of which registered double-digit annual appreciation in February, it should be noted – are seeing reacceleration of home price growth. And that is all while interest rates climbed nearly one-third of a percent in February and are now up more than 1.25% since the start of the year.”

Conversely, the report said affordability is now at its lowest point on record outside of 2004-2007, with the monthly principal and interest payment for the average-priced home purchase up $329 (24%) year-to-date. It now takes 29.1% of the median household income to make that P&I payment, up from 19.3% just 15 months ago and a full 4 percentage points more than the 1995-2003 long-term average. The report said 82 of the 100 largest U.S. markets are now less affordable than their long-term benchmarks, up from six at the start of the pandemic.

“In recent years, a payment-to-income ratio above 21% has worked to cool the housing market, but record-low inventory continues to fuel growth even in the face of the tightest affordability in 15 years,” Graboske said.

For example, Graboske noted entering the year, a prospective homebuyer who could budget a $1,700 monthly P&I payment – roughly the amount required to buy the average home today, excluding taxes and insurance – could afford a $497,000 house. With Freddie Mac reporting the average 30-year rate at 4.42% on March 24, that same borrower can now afford less than $425,000.

The report also noted fewer than 750,000 loans remain in active forbearance, with another 400,000 that are no longer in forbearance but still involved in active loss mitigation efforts. “Recent post-forbearance liquidations have leaned more heavily toward cash-out refinances, with homeowners perhaps seeking to reset themselves financially,” Graboske said.