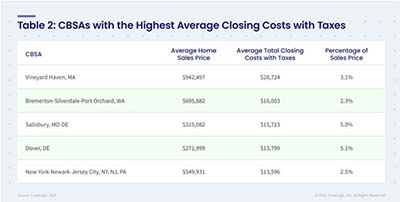 It’s getting more expensive to own a home—and to close on one, too.

“As the mortgage industry comes off two years of record-low interest rates and red-hot consumer demand, lenders are now pivoting to address increasing headwinds from higher loan origination costs and lower origination volumes,” said Bob Jennings, executive with CoreLogic Underwriting Solutions. “The Mortgage Bankers Association recently reported lender origination costs show a 13.2% year-over-year increase, which corresponds closely to the 13.4% increase we are seeing on purchase mortgage closing costs. As the market tightens in 2022, it will be interesting to see how lenders and borrowers respond and how these key metrics move.”