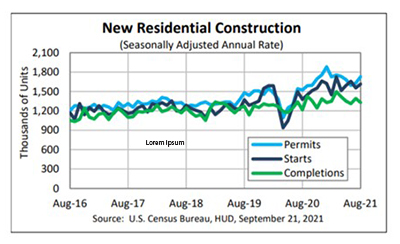 Home builders liked what they saw in August—HUD and the Census Bureau said August housing starts rose by nearly 4 percent from July, almost entirely by multifamily activity, and by more than 17 percent from a year ago.

Regionally, results were mixed–and rather disparate. In the West, starts fell by 21.1 percent in August to 318,000 units, seasonally annually adjusted, from 403,000 units in July and fell by 7 percent from a year ago. In the Northeast, however, starts leapt by a staggering 167.2 percent in August to 179,000 units from just 67,000 units in July; from a year ago, starts in the Northeast more than doubled by 105.7 percent.

Vitner said the drop in single-family starts “has more to do with supply shortages than weakening demand, however. Builders are increasingly having to limit sales, as they are uncertain when they will be able to complete homes due to ongoing shortages of essential building materials.”

“Builders continue to battle supply-side constraints, including a shortage of skilled labor, materials and lots, all headwinds to increasing the pace of new home construction that is necessary to alleviate the supply shortages in today’s housing market,” Kushi said. “The bottom line is the housing market has been underbuilt for a decade and builders can’t close the gap between supply and demand overnight, but they are trying. Yet, strong supply-side headwinds remain. Many existed even prior to the pandemic, but worsened during the pandemic.”

Mark Palim, Deputy Chief Economist with Fannie Mae, Washington, D.C., noted while single-family starts remain below their recent peak hit in December 2020, the broader trend in recent months is holding steady at a pace that is still more than 20 percent higher than the 2019 pre-COVID average.

“Continued strong house price appreciation and limited supply of existing homes for sale should continue to drive demand for new homes going forward,” Palim said. “The pace, however, will be limited by the speed at which current materials and labor constraints are alleviated.”