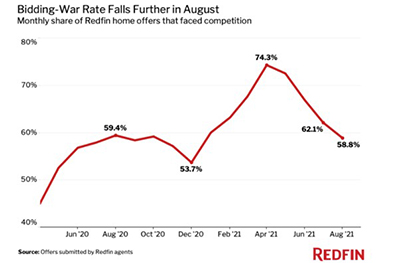 It’s already been a busy week for housing industry reports–and it’s only Wednesday! Here’s a quick summary of some of those coming across the NewsLink desk.

Redfin said while sellers continue to have the upper hand, buying a home has become slightly easier this summer as the country’s acute shortage of homes for sale is no longer intensifying and the market has undergone its typical seasonal slowdown. Home-price growth is stabilizing following months of record gains, and measures of competition aside from the bidding-war rate are also losing steam. For example, 50% of homes sold above their list prices during the four weeks ending Sept. 5, down from a peak of 55% in July. Of the homes that went under contract during that period, 47% had an accepted offer within the first two weeks on the market, down 9 percentage points from the 2021 peak set in March.

“Sellers are still pricing their homes very high, but a lot of buyers have had enough and are no longer willing to pay the huge premiums they were six months ago,” said Nicole Dege, a Redfin real estate agent in Orlando, Fla., where the bidding-war rate dropped to 57.5% in August from 78.9% in July. “Buyers are getting a bit more selective.”

Raleigh, N.C. had the highest bidding-war rate of the 48 U.S. metropolitan areas in this analysis, with 86.7% of offers facing competition in August. Next came San Francisco/San Jose, at 70.7%, and Tucson, Ariz., at 70.5%. Cincinnati and Salt Lake City rounded out the top five, with bidding-war rates of 70.4% and 68.1%, respectively.

Remote Work to Fuel Housing Demand for Years to Come

A new Zillow survey finds remote workers are far more likely to move, yet nearly 40% of employees still don’t know if or how often they must return to their workplace.

Additionally, more than one-third of those workers (35%) say that uncertainty is impacting their ability to make decisions about their lives, such as the decision to move.

“Workers are clear in their desire for more flexibility,” says Meghan Reibstein, vice president of organizational operations with Zillow. “It’s no surprise employees are willing to change jobs to get to this more sustainable way of working, and employers risk losing people if they ignore employees’ preferences. If given the freedom to move, employees can work where they’re happiest and most productive, which is a win for them, their organizations and their communities.”

Fitch Ratings, New York, said originators of non-qualified mortgages are ramping up their loan activities after halting production for nearly 18 months in response to the coronavirus pandemic.

Fitch noted while non-QM remains a relatively small part of the overall mortgage market, some originators and aggregators have reengaged in this sector and have beefed up production of these more difficult-to-originate loans. This trend is happening as traditional Prime originators continue to benefit from the low mortgage rate environment and associated rate-term refinance production. Most non-QM originators who suspended their production in the early part of 2020 have begun to re-enter the space.

Fitch is also seeing more players contribute in the prime agency and jumbo markets coming out of the pandemic. Private-label securitization overall has increased notably over the past few months in line with the higher origination activities.

In a separate report, Fitch said late-stage non-prime delinquencies are down year over year for both U.S. bank and non-bank mortgage servicers.

“Bank servicers showed the most significant loss mitigation results over the past year with forbearance plans now down to 38% from 93% of all loan workout plans while repayment plans and loan modifications have seen significant increases as borrowers exit forbearance plans,” said Fitch Director Richard Koch. “Non-bank servicers are also reporting positive loss mitigation trends, albeit to a more modest degree.”

The report said cash-out refinance lending is up more than 41% over the past three months and nearly 30% since the same time last year. August’s increase in cash-out activity was enough to bring the refinance share of the market above 50% for the first time since February.

“After starting the month below 3%, interest rates spent much of August hovering just above that point, with the conforming 30-year at 3.05% at month’s end, according to our OBMMI daily interest rate tracker,” said Black Knight Secondary Marketing Technologies President Scott Happ. “That sub-3% period seems to have been enough to spur some high-credit-score and high-balance borrowers to refinance, as average credit scores rose along with the non-conforming share of the market.”

“Record high home price growth has priced many renters out of buying, leaving many facing higher rents this summer as more households look to move thanks to the rise of remote and flexible work arrangements,” said Redfin Lead Economist Taylor Marr. “The end of pandemic eviction moratoriums and mortgage forbearance may also cause landlords to raise rents to cover the risk of future tenant protections or make up for lost rental income.”

Most of the metro areas with the biggest increases in rent were warm, affordable destinations in Florida, California and Arizona that have benefitted from a surge in migration thanks to a newly mobile workforce. Rents were up the most from a year earlier in Tampa, Fla. (29.2%), followed by West Palm Beach, Fla., Miami and Fort Lauderdale, Fla.