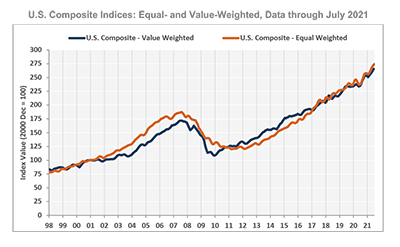 Values rose in both the investment-grade and the general commercial segments, CoStar reported. Its equal-weighted index, which tracks lower-priced but more numerous property sales typically seen in secondary and tertiary markets, rose for the fifth straight month in July, increasing 0.8 percent during the month. Pricing in the value-weighted index, which is more heavily influenced by high-value trades, rose once again to a new record. That index rose 1.4 percent in July.

Year-over-year gains for the value-weighted index stood at 13.3 percent in July, “as commercial real estate investors continue demonstrating their conviction for the long-term return prospects offered by high-quality assets,” the report said. “Strong year-over-year gains also reflect the recovery in investor sentiment and appetite for large deals, following the relatively quiet period during the height of the pandemic.”

The number of commercial property sales moderated in July compared to June but remains near historic highs, CoStar said. After nearly 2,100 repeat sales closed in June, there were 1,591 sale pairs in July. Despite the slight month-over-month moderation, July repeat sales were roughly in line with the trailing 12-month average, which shows overall investment activity is holding steady near the level recorded prior to the pandemic, the report noted.

Sellers are achieving record-high sales prices compared to asking prices, CoStar reported. The sale price-to-asking price ratio surged to 94.4 percent in July, “signaling buyers are increasingly willing to pay top dollar for commercial real estate assets,” the report said. The ratio increased from 93.9 percent in June and from 91.8 percent in July 2020. “This trend indicates that the commercial real estate investment scene has become more competitive in recent months, as buyers are more likely to up their offers on properties in an attempt to win deals,” CoStar said.

“Property prices have been increasing all year, but things have accelerated recently,” said Peter Rothemund, Co-Head of Strategic Research at Green Street. He said property prices are up 9 percent on average over the few months and gains in some property sectors have been even larger.

“While the pace of appreciation may slow, further increases in pricing seem inevitable,” Rothemund said.