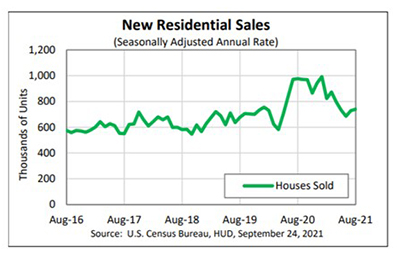 New home sales rose in August for the second straight month and at the fastest pace since April, HUD and the Census Bureau reported Friday.

“The modest pick-up in sales continues to show that underlying demand for homes remains strong,” said Mark Vitner, Senior Economist with Wells Fargo Economics, Charlotte, N.C. “The slight pull-back in sales experienced this spring and early summer likely had more to do with builders struggling to build enough homes to show prospective buyers. It is challenging to sell a home when you are unable to tell a buyer when that home will be completed.”

Vitner noted while lumber prices have come down from levels seen this spring, other key building materials remain in short supply, which is delaying new starts and preventing projects from wrapping up. “Sales would likely be even stronger if builders were able to procure the parts and labor needed to complete single-family projects,” he said.

Kushi said the outlook for new home sales is largely dependent on the amount of new homes being built and the demand for new homes. “Demographic demand remains strong, the economy is improving and mortgage rates are low,” she said. “Builders want to build, but face challenges that raise costs and delay construction.”

The report said the median sales price of new houses sold in August was unchanged at $390,900. The average sales price was $443,200, down slightly from July. The seasonally adjusted estimate of new houses for sale at the end of August rose to 378,000, representing a supply of 6.1 months at the current sales rate.