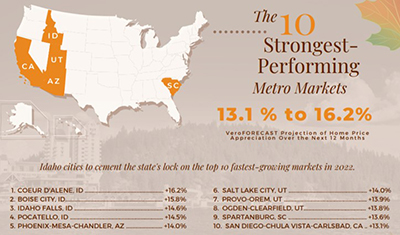 The company’s quarterly VeroFORECAST anticipates home prices will appreciate on average by 7% for the next 12 months, with many of the top-performing cities continuing to trend upward at double-digit rates.

“Market fundamentals, such as declining unemployment and low interest rates, continue to keep house prices trending upward,” said Eric Fox, Veros Real Estate Solutions Chief Economist. “A limited supply of homes for sale and below-average new housing construction in recent years has fueled the red-hot market. Despite strong signals of upward inflation pressure, the Federal Reserve seems determined to keep interest rates low. Although we expect some upward pressure on interest rates, they are likely to remain low into 2022. This historically low interest rate environment in conjunction with numerous other factors is pointing to a continued robust housing market.”

Fox said Veros does not believe that present conditions resemble conditions that were present during the housing bubble of 2007-2008.

The report said cities in Idaho now occupy the top four spots on the list of strongest performing markets during the next year, cementing the state’s lock on the Top 10 in 2022. Phoenix holds down the #5 spot and is the largest metro area in the Top 10. Three cities in Utah occupy the next 3 spots with a newcomer to the list, Spartanburg, S.C., as number 9. San Diego, which is usually recognized as a hot housing market, rounds out the Top 10. With the exception of Spartanburg, cities in the West, again, occupy the majority of the Top 10 metro areas.

Of the 100 most-populated markets, the two least-performing markets again this quarter are forecast to be in Texas oil country – Odessa and Midland – although the forecast noted other markets in Texas are expected to do very well. Louisiana occupies four spots in the 10 least-performing markets, with Illinois and North Dakota each with two cities on the list. All of these markets are forecast to still appreciate slightly – less than 1% to well in the 3% range.