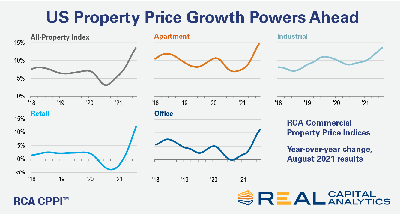 Industrial prices climbed 13.6 percent year-over-year, while retail prices grew 12.1 percent. “While the retail sector in general has suffered during the COVID era, some segments such as grocery-anchored centers have remained buoyant,” Omundsen noted.

Peter Rothemund, Co-Head of Strategic Research at Green Street, Newport Beach, Calif., said commercial real estate has gone from a property pricing recovery “to a full-on bull market.” He noted only hotel, mall and office properties remain below pre-COVID price levels. “Everything else is above, or well above, where it would have traded a year and a half ago,” he said. “Industrial and apartments are getting the lion’s share of attention.”

CoStar, Washington, D.C., said CRE transaction volume reached a record level in August. The number of transactions year to date exceeds last year’s figure by 66 percent and is 29 percent higher than the first eight months of 2019. The data firm said this trend points to a return to “typical liquidity conditions.”

Absorption could reach a three-year high for the 12 months ending in September, CoStar noted. Net absorption in office, retail and industrial properties combined could increase to 333.6 million square feet, the highest figure since September 2018. “Absorption is expected to be weighted slightly toward the general commercial segment, but both the general commercial and the investment-grade segments are experiencing strong demand,” the report said.