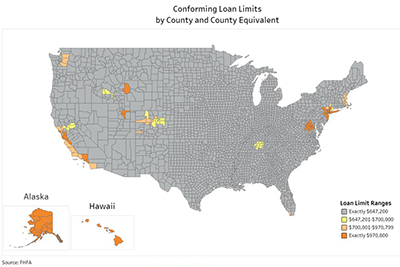 Conforming loan limits for Fannie Mae and Freddie Mac will rise to $647,200 jump in 2022, the Federal Housing Finance Agency said on Tuesday—a jump of nearly $100,000 from 2021’s previous record high.

Special statutory provisions establish different loan limits for Alaska, Hawaii, Guam, and the U.S. Virgin Islands. In these areas, the baseline loan limit will be $970,800 for one-unit properties.

HERA requires that the baseline CLL for the Enterprises be adjusted each year to reflect the change in the average U.S. home price. Also on Tuesday, FHFA published its third quarter House Price Index report, which includes statistics for the increase in the average U.S. home value over the past four quarters. According to the nominal, seasonally adjusted, expanded-data FHFA HPI, house prices increased by 18.05 percent, on average, between the third quarters of 2020 and 2021, thus establishing the baseline CLL for 2022 will increase by the same percentage. ​