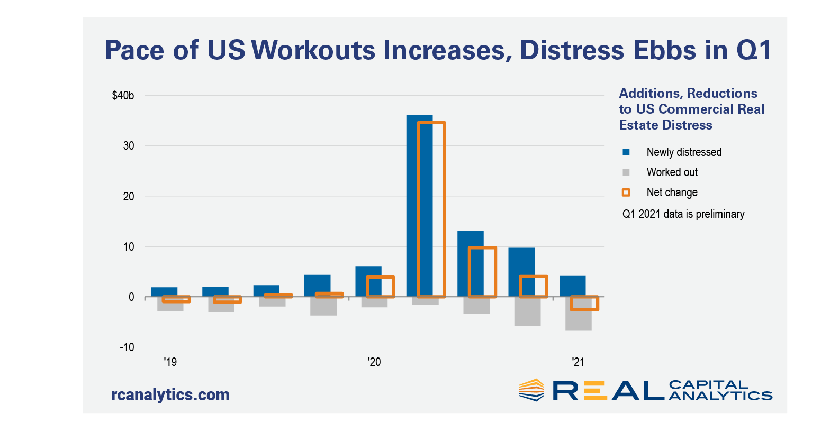 “All other things being equal, this change in behavior would be an important sign of a transition in the marketplace,” said RCA Senior Vice President Jim Costello. “We are not finished with all aspects of distress, however. There is a looming supply of potentially distressed loans that still may have an impact.”

“Many of the properties that had an updated appraisal were already in distress prior to the pandemic, meaning they were more susceptible to higher valuation declines during the economic disruption,” said Larry Kay, Senior Director of CMBS Surveillance with KBRA. “However, while property valuations may continue to be under pressure in the near to medium term, improving property fundamentals and valuations could be in sight.”

Green Street said non-performing loans made up 0.86 percent of the commercial mortgages on the balance sheets of the 325 largest U.S. banks at year-end, up from 0.41 percent from a year earlier. The current figure represents a fraction of the record 8.6 percent peak hit in 2010.

“The low levels of bad debt are due in part to a host of forbearance measures implemented [last year] to assuage the effects of shutdowns enacted to curb the virus’ spread,” Green Street said in a new report, Distressed Real Estate Doubles. “As those accommodations expire, however, the level of troubled debt is expected to tick higher, stoking optimism that more distressed opportunities could shake loose down the road.”

Costello noted the pace of workouts will play an important role in the process of price discovery for commercial properties. “Deal volume has contracted sharply over the last year as owners and potential buyers disagree on how assets should be priced,” he said. “To the extent that there are more loan workouts, information from these negotiations will adjust buyer and seller expectations on prices that can be achieved.”