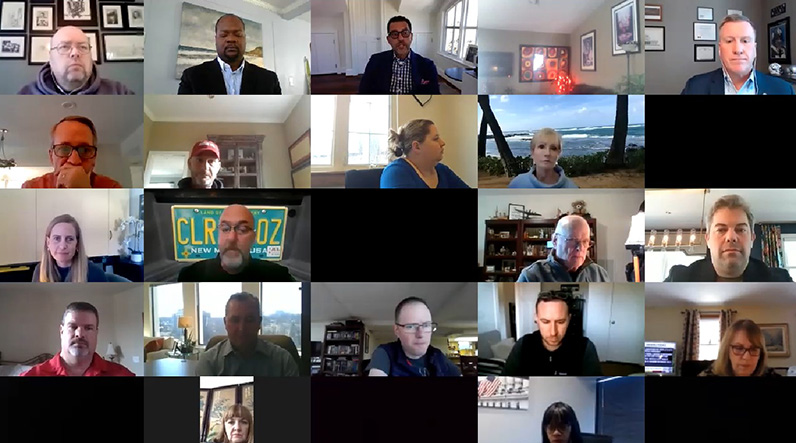 At a Jan. 28 webinar announcing the campaign, MBA Vice President of State Government Affairs & Industry Relations William Kooper said MBA is working with state and national mortgage licensing agencies to utilize their current written guidance documents and “no action” letters, which have enabled MLOs to serve consumers during the pandemic, to modernize mortgage industry supervision in the states to better meet consumer needs.

“It’s about much more than the ability to work from home,” Kooper said. “It’s about modernizing licensing laws for the first time in perhaps a decade that allows us to apply the lessons we are learning from the pandemic to a post-pandemic world.”

Indeed, the issue became acute last March, when the full impact of the coronavirus hit. In response, dozens of states issued shelter-in-place orders, and state regulators gave permission for licensed staff of independent mortgage banks to work from other than a licensed location, rather than require members of their teams to operate from a licensed branch office. Kooper said to many states’ credit, they worked quickly to provide the necessary legal certainty which allowed licensed staff to continue to function and serve consumers during this time of national crisis.

Now, Kooper said, MBA and its state partners want to make those arrangements permanent. MBA has corresponded with and held discussions with the Conference of State Board Supervisors, articulating the uncertain trajectory of the virus and how that uncertainty was creating issues for MBA member companies.

But what captured our attention was policy at the state level, where there are multiple conflicts of rules and regulations,” Kooper said. “Many of these orders had short term timelines, and we quickly found that they all needed to be extended.  Tracking each state’s policy, in turn, created yet another perplexing challenge for our members in the early months of these shelter in place mandates.”

To appreciate the scope of the problem, MBA created a member Task Force that came up with both short-term and long-term goals. It recommended in states where this regulatory flexibility was provided, it should be uncoupled from any time frames in state or national shelter-in-place declarations or emergency executive orders and it should be extended without sunset dates, but at least through 2021. Additionally, state policy makers should allow a 120- day transition period to provide the industry adequate time to return to licensed locations. Such action would allow for the development, testing and wide distribution of a reliable vaccine(s).

Lastly, the Task Force felt strongly that industry and policy makers should work together to change state licensing laws for a couple other important reasons. Not only should changes be contemplated to prepare for a potential future national emergence or a regional natural disaster, but also to help industry meet consumers’ demand for service outside the traditional 9-5 office paradigm. On this latter point, the Task Force also noted the pandemic has tested both industry and regulators to rethink some anachronistic provisions of law such as requirements for MLOs to live within a specific commutable distance from a licensed location.

Late last year, MBA President and CEO Robert Broeksmit, CMB, met with CSBS leaders to discuss these issues. “The good news is, a key CSBS regulatory committee – the Non-Depository Supervisory Committee — issued a memorandum to all states that echoed a lot of recommendations that MBA made,” Kooper said.

To help facilitate these changes, MBA has released proposed model state legislation and regulation to apply the lessons of the pandemic and make these flexibilities permanent. Talking points, FAQs and an issue brief are also available.

MBA wants these independent state and local associations to lead the advocacy with state legislators and regulators to give MLOs continued flexibility to work remotely while providing critical client services. Already with the new year, several states, such as Washington and Arkansas are considering bills that would allow such flexibility. “Maryland’s regulator has proposed new rules,” Kooper said, “which could be very helpful. There is a window of opportunity, and we need to take advantage of it.”

Melissa Koupal, senior vice president with loanDepot and chair of MBA State Legislative and Regulatory Committee, said the time for such flexibility is now. “It’s a great opportunity for the industry to push forward for the future of our industry — this is a business opportunity, not just a licensing issue,” she said.

Koupal said as a nationwide lender, the patchwork of work-from-home provisions creates numerous problems. We have 400 branches across the country,” she said. “Some of our offices are licensed in more than 25 states, but as some states roll back their regulations and say ‘you need to be back in the office’, we have asymmetrical patterns emerging. We need one voice behind the natural progression the industry needs to make.”

Haydn Richards, Partner with the Bradley Law Firm, Washington, D.C., agreed. “We need to turn lemons into lemonade,” he said. “The MBA model bill and rule [referenced above] basically allows MLOs to work from wherever they are, as long as there are appropriate supervisory measures in place. We didn’t want to limit remote locations to the home; some MLOs could be elsewhere, such as at a family member’s residence, so we allow that provided all consumer and data protection requirements are maintained.”

Bob Niemi, CMB, Senior Advisor with the Bradley Law Firm, Washington, D.C., said the pandemic has turned the concept of “branch licensing” on its head.

“Branch licensing is not a new discussion, and it limits credit by limiting the distance in which people can work and prevents them from more broadly serving customers,” Niemi said. “We also have to move the business from a physical business to a digital business.”