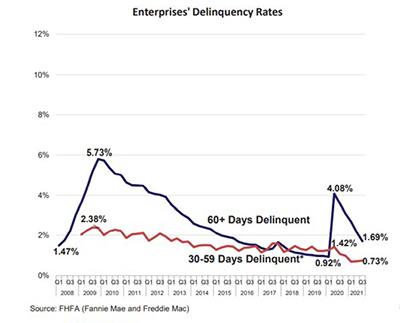 The Federal Housing Finance Agency released its third quarter Foreclosure Prevention and Refinance Report, showing Fannie Mae and Freddie Mac completed 180,566 foreclosure prevention actions during the quarter, raising the total number of homeowners who have been helped to 6,210,485 since the start of conservatorships in September 2008.

The report said the Enterprises’ serious delinquency rate dropped from 1.99 percent to 1.55 percent at the end of the quarter, compared to 8.19 percent for FHA loans, 4.48 percent for VA loans and 3.40 percent for all loans (industry average).

–Loans in forbearance plans continued to trend downward since its peak in May, as initiated forbearance plans decreased but remained elevated through the third quarter compared to pre-pandemic levels. As of September 30, FHFA reported 320,009 loans in forbearance, representing 1.07% of the Enterprises’ single-family conventional book of business, down from 490,508 or 1.65% at the end of the second quarter.

–Foreclosure starts increased by 16 percent to 7,253, while third-party and foreclosure sales rose 11 percent to 2,534 in the third quarter.