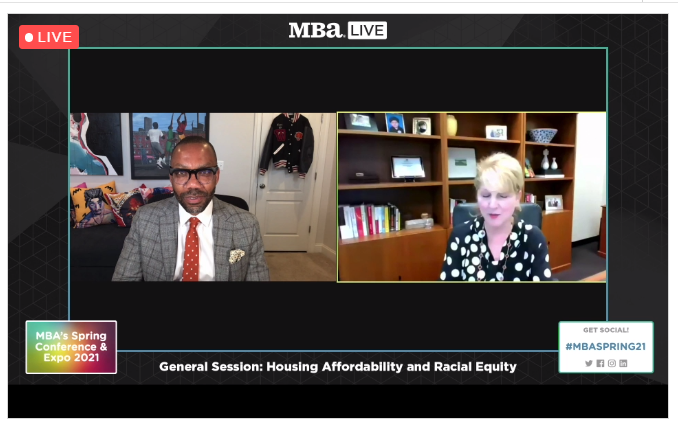 Brookings Institution Senior Fellow Andre Perry says Black-owned homes are “systemically undervalued,” with obvious adverse consequences for wealth accumulation. And he has some ideas about what can be done.

Perry’s book, Know Your Price: Valuing Black Lives and Property in America’s Black Cities, studies how we value assets in Black communities, he said during MBA’s Spring Conference & Expo 21. He and his team compared home values in neighborhoods where the share of the Black population exceeds 50 percent to homes in areas where the Black population is less than that.

Perry found controlling for education, crime, walkability and “all those fancy Zillow metrics,” homes in Black neighborhoods are underpriced by 23 percent, or about $48,000 per home. “Cumulatively, that’s about $156 billion in lost equity,” he said. “That’s a big number.”

Digging deeper, Perry found other “drags in the market” that subtract wealth at multiple levels. “A lot of people have pointed to appraisals,” he said. “That’s just one factor in the housing market. Just to give a concrete example, we know that redlining impacted Black-majority neighborhoods and led to a lack of investment in some areas over time up until the 1970s. That led to a lack of resources. But there are several other practices that also contributed to that. We know there are comparative models that appraisers use when they compare a home to others in the neighborhood. If you are comparing a home with other homes that have been discriminated against, you’re essentially just recycling discrimination over and over again. So, there needs to be a fix for that.”

Perry’s research has also found other housing-market challenges. “For young people in particular, you see about six million Millennials that are mortgage-eligible but can’t find a home to meet their price point,” he said. “It really gets to the accountability issue. And when people apply for a loan they qualify for and they are denied, people need to be held accountable for that. It’s discouraging when you meet all the requirements yet you don’t get a loan.”

Perry said The Brookings Institution and non-profit organization Ashoka recently launched an initiative to restore value to homes in Black majority neighborhoods by identifying the most promising innovations to address devaluation. The Valuing Homes in Black Majority Neighborhoods initiative invites people to participate in a collaborative “innovation challenge” with up to $1 million in prize funds.

“If you are a person who is interested in finding solutions, look it up,” Perry said. “Enroll in the initiative. It’s not a competition; people actually work together to cross-pollinate their ideas. It’s a great opportunity. A great, great opportunity.”

MBA and the Tennessee Housing Development Agency will host a virtual homebuyer fair in Memphis, Tenn., on Saturday, April 24 as part of its CONVERGENCE initiative to increase African-American homeownership. “It’s part of our community engagement efforts to promote minority homeownership,” said MBA Senior Vice President for Affordable Housing Initiatives Steve O’Connor. “We think in the long run, these place-based initiatives can provide laboratories for us to test and learn and hopefully create road maps for community engagement.”

Click here for more information about the CONVERGENCE event in Memphis.