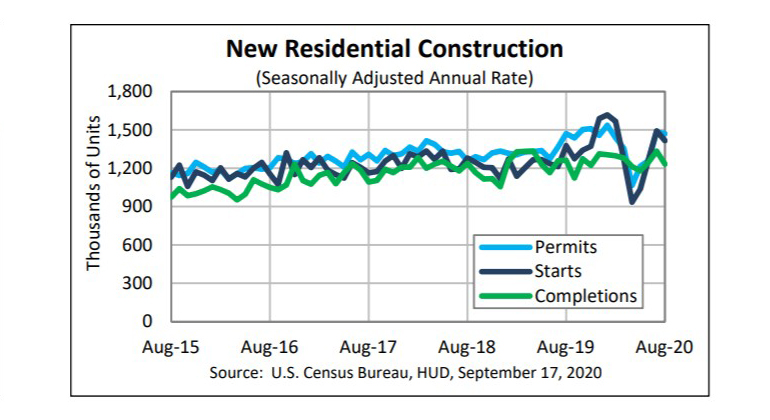 Housing starts—one of the bright spots in a red-hot summer housing market—faltered in August, HUD and the Census Bureau reported yesterday, although most of the decline took place in multifamily.

Regionally, results were mixed, as declines in the South and Northeast more than offset gains in the West and Midwest.

“While there is a constant lookout for evidence that the recovery is losing steam due to the ending of many major stimulus efforts, the underwhelming August housing starts data does not support that case,” said Mark Vitner, Senior Economist with Wells Fargo Securities, Charlotte, N.C. “We had expected to see some payback in August, following the prior month’s surge in multi-family starts, which jumped 37% in July to a 503,000 unit pace. One-month spikes in multi-family starts happen from time to time and are often reversed one or two months later.”

Vitner said apartment construction appears to winding down, with much of the slowdown coming in construction of high-rise urban projects in larger metropolitan areas. “Development is pivoting toward the suburbs, however, so activity is not headed dramatically lower,” he said. “On a three-month average basis, multi-family starts have averaged a 427,000-unit pace. We doubt that pace will hold up for the year, however. We expect multi-family starts to come in at around 385,000 units for all of 2020.”

Vitner also observed the recent spate of storms along the Gulf Coast appears to have temporarily slowed starts in the South, which typically account for more than half of the nation’s single-family housing starts each month. “The bulk of the South’s home building occurs in Texas and Florida, although builders in Georgia, the Carolinas and Tennessee are also incredibly busy and are selling homes faster than they build them,” he said.

“The housing market continues to face a supply and demand imbalance, and the gap is at risk of widening if new supply cannot keep pace with growing demand,” Kushi said. “Builders see the lack of existing homes for sale as an opportunity to build more new homes, and homebuilder sentiment is now at an all-time high…However, supply-side headwinds remain. The rapid increase in the cost of lumber is, in turn, increasing the cost of building. And residential construction employment is still not back to pre-pandemic levels. Supply-side headwinds could slow the home-building momentum at a time when the housing market desperately needs new construction.”

Doug Duncan, Chief Economist with Fannie Mae, Washington, D.C., noted in recent months, single-family new home sales have outpaced their usual relationship to starts, leading to a sizable backlog of homes to be built. “Additionally, inventories of existing homes for sale remain extremely tight relative to the pace of sales, likely driving many potential homebuyers to look at new homes for sale,” he said. “Together, these factors remain highly supportive of a strong pace of new housing construction in the coming months.”

“Single-family permits rose to over a million annualized units, the highest level since mid-2007,” Duncan said. “We expect low mortgage rates, continued pent-up demand and increased interest in suburban areas in some metro areas will likely continue. Furthermore, we believe that the Federal Reserve’s recent policy announcement suggesting that short-term interest rates will remain lower for longer should help anchor longer-run rates like the mortgage rate, though this will also depend in-part on the Federal Reserve’s future management of inflation expectations.”