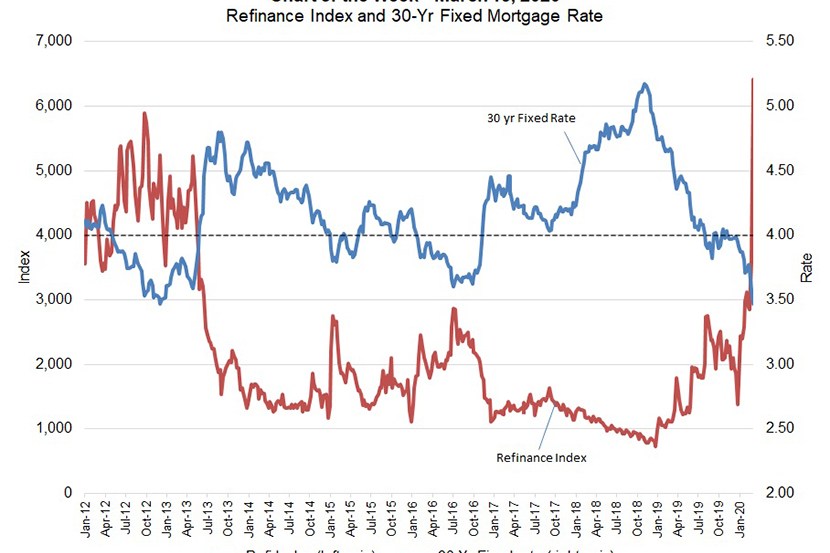 Treasury rates and mortgage rates have fallen to historic lows, driven down by the market turmoil and volatility caused by the uncertainty around the spread of the coronavirus.

In fact, over a four-week span, mortgage rates have dropped 30 basis points to an all-time low for the MBA Weekly Applications Survey: 3.47 percent. The result has been a surge in refinances.

This week’s chart details the decline in mortgage rates and the Refinance Index, which jumped by nearly 80 percent last week. This was the largest single-week move in the index since 2008. The index, at 6,418 (compared to an index value of 100 in March 1990), is at its highest level since April 2009.

As we highlighted last week, mortgage rates have not decreased as quickly as the 10-year Treasury yield, which has fallen by nearly 80 basis points in the same four-week period. One reason spreads between the rates remain wider than usual is because lenders were already facing capacity constraints before this wave of refinancing hit the market. They simply have not been able to hire fast enough to meet the refinance demand.

This week, we revised our forecast for 2020 mortgage originations significantly higher, based on the outlook for rates and the broader economy. Refinance originations are now expected to total $1.2 trillion–a 37 percent increase from last year. Overall, we expected a total of $2.6 trillion in volume, the strongest year since 2006.