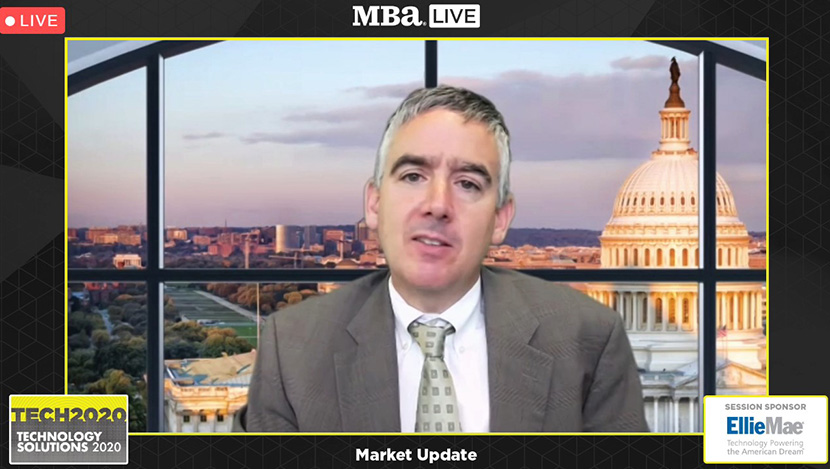 With all that has hit the mortgage industry over the past several months, Mortgage Bankers Association Chief Economist Mike Fratantoni has a positive message for mortgage lenders and servicers.

“It seems like the industry has done a fantastic job of finding solutions in this crazy environment,” Fratantoni said yesterday during MBA Live: Technology Solutions Conference. “We are hearing anecdotally that lenders are closing loans at roughly the same rate as they were before they switched to remote workplaces.”

Fratantoni said recent extraordinary events—the COVID-19 pandemic and the resulting shutdown of the U.S. economy over the past several months—could have knocked the mortgage industry on its head. Instead, he said, mortgage lenders and servicers showed remarkable agility in adapting to changing conditions, particularly in technology.

Fratantoni noted MBA and MISMO have had some success in getting Remote Online Notarization adoption in a number of states—an option that customers have responded to in a positive way. “We are getting much closer to eClosing,” he said. “All of this will lead to a great improvement in productivity over time but it remains to be seen if this will accelerate the industry’s efforts to use more digital resources.”

One of the most interesting dynamics over the past two months, Fratantoni said, involves unemployment and the housing market. “What’s been most distressing about this downturn has been the sheer number of people who have been directly affected so quickly,” he said. “We’ve never seen job losses of that speed before. In February, the unemployment rate was at a 50-year low. Two months later, we’re at 14.7 percent, the highest level since the Great Depression. And it likely under-stresses the degree of actual unemployment right now.”

From a housing standpoint, Fratantoni said a unique aspect of this crisis is that” although there is pain everywhere, it is most concentrated in certain areas. Leisure and hospitality have been particularly hard hit. Just in April we saw a 47 percent decline in travel, hotel, arts and entertainment, sporting events—completely shut down by the pandemic. Because of the underemployment reporting, we could see the main unemployment report as high as 18-20 percent. We also saw a big decline in retail, but it’s part of a pattern in which people have been moving to online purchasing.”

This creates an unusual situation for housing and mortgages, Fratantoni said. “Our suspicion right off was that we were going to see more distress in the renting sector instead of the mortgage sector, and that appears to be borne out,” he said. “All of these numbers are so far away from what we possibly could have forecasted. GDP could fall by as much as 8 percent; but we could also see just as strong a rebound leading into 2021. By the end of 2020, unemployment could still be at 10 percent; by the end of 2021, it could still be as high as 6 percent. So, the scars are going to be felt for a long time.”

Fratantoni noted the government’s response has been equally robust. “The federal funds rate is back to zero, and we expect it to stay there through most of 2022,” he said. “Treasury rates hit an all-time low of 3.15 percent and it could go lower. But we think Treasury rates are going to rise a little bit faster than mortgage rates over the next couple of years. The Treasury Department has spent trillions; to do so, it has had to borrow trillions. That has us thinking that longer-term Treasury rates are going to inch up, rather than jump up.”

While mortgage rates are low, the spread between 10-year and 30-year Treasury rates have been abnormally high, Fratantoni said. “This is usually a function of capacity; lenders are just swimming with new loan application volume, and in that environment, primary rates don’t drop as much as secondary rates,” he said. “Also, there is a disparity between secondary rates and tertiary rates. The big question going forward is, are those spreads going to come in as Treasury rates rise? Or are they going to come in even if they don’t?”

If mortgage rates fall more—and Fratantoni said they could fall below 3 percent—it could trigger a new refinance wave. Total application volume is 75 percent ahead of last year, mostly driven by refis, which are more than 100 percent ahead of last year,” he said. “I fully expect that if rates level out, refi rates will taper out over 2020 but stay at this high level. If rates go up by a half-percent next year, then refi volume will drop off precipitously.”

The home purchase market has shown strength, Fratantoni said, leading MBA to believe that it could lead to a rebound in housing demand.

“We’ve heard speculation about what the economic recovery might look like—is it going to be ‘U’-shaped, ‘V’-shaped, ‘W’-shaped,” Fratantoni said. “As far as housing demand, we are seeing a ‘V’-shaped recover. And this happened almost as soon as some of the pandemic lockdowns began to let up. A lot of households were apparently planning their next move during lockdown. We’re guessing that things will moderate; but it’s still been surprising how robust this purchase market has been.”

However, the MBA Mortgage Credit Availability Index has also seen a tightening of credit. “It’s also getting a little tougher to refinance,” Fratantoni said. “So the question is, is the tighter credit environment going to hurt the next round of home buyers? We’re also seeing significant restrictions in jumbo liquidity. Most jumbo loans go on bank portfolios; but what’s been interesting that over the past seven years, the jumbo rate was below the conforming rate; that has changed dramatically recently. The temporary shutdown of the private-label securities market; and the need for banks to manage their portfolios more diligently. It’s been an interesting change in the complexion of the jumbo market.”

New construction remains in flux, Fratantoni said. “We had seen a very slow return to robust levels of construction,” he said. “By the end of 2019 things were beginning to stabilize and show growth. Then March and April hit. We still see a decline in new home sales, but it isn’t nearly as bad as for existing home sales. It will be a strange outcome that even though demand has slowed, inventory has decreased even more, which could drive up home prices.”

Overall, however, MBA has been “very impressed by the extraordinary rebound in mortgage volume. The refi side will be rate-driven, but we expect at 15-20 percent drop by year end. It will still be robust, because we think people can see a benefit if they can get a ½ percent savings. We see 2020 and even 2021 at more than $2 trillion in total mortgage volume.”