An Upbeat Jobs Report, Followed by a ‘Misclassification Error’ 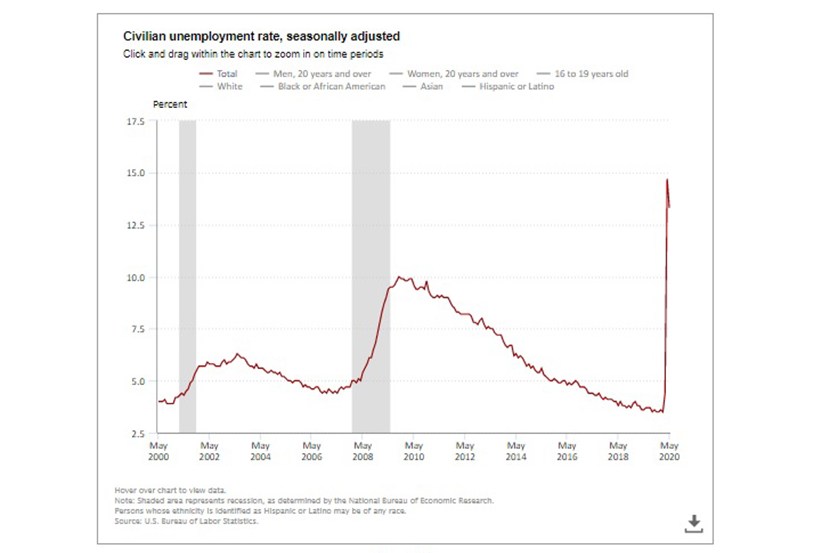 At 8:30 a.m. on Friday, the Bureau of Labor Statistics issued a surprising May unemployment report: instead of the 8 million job losses expected by economists’ consensus, the report showed a dramatic 2.5 million increase in jobs, and a 1.4 percent dip in the unemployment rate, from 14.7 percent in April to 13.3 percent.

President Trump touted the numbers in the Rose Garden; economists recovered and explained why the sudden turnaround could have occurred; and the stock markets rallied, jumping nearly 830 points by days’ end.

But there was a catch—a huge catch. On Saturday, the Associated Press reported BLS included a special note at the bottom of the report, disclosing a “misclassification error” that skewed the reported May numbers, as well as March and April data.

“As was the case in March and April, household survey interviewers were instructed to classify employed persons absent from work due to coronavirus-related business closures as unemployed on temporary layoff,” BLS said. “However, it is apparent that not all such workers were so classified. BLS and the Census Bureau are investigating why this misclassification error continues to occur and are taking additional steps to address the issue.”

BLS offered no further clarification, economists and former BLS leaders told the Washington Post they did not believe that the data had been tinkered with or manipulated by the Trump Administration.

Mortgage Bankers Association Chief Economist Mike Fratantoni said regardless of which unemployment rate number is correct, “this still represents an unbelievable amount of distress for almost 21 million households across the country.”

Fratantoni on Friday said the overall data show the housing market is helping to lead an economic rebound. “We have highlighted the sustained seven-week increase in purchase applications, including two consecutive year-over-year gains,” he said. “Friday’s report also revealed a sharp return in construction employment, indicating that homebuilding is on the mend, which should help to further boost a broader economic recovery.”

Odeta Kushi, Deputy Chief Economist with First American, Irvine, Calif., agreed. “The housing market was directly hit in last month’s jobs report, as residential construction jobs fell to their lowest level since 2016, but have already started to turn a corner in May’s report,” she said. “In April, pandemic-related pressure drove the supply of homes for sale to its lowest April supply level ever. Even in the years prior to the pandemic, the lack of housing supply for sale was a significant headwind to the housing market. This report is not only a signal that the broader labor market has started to rebound, but a bright spot for a housing market in desperate need of more supply. More hammers, more homes.”