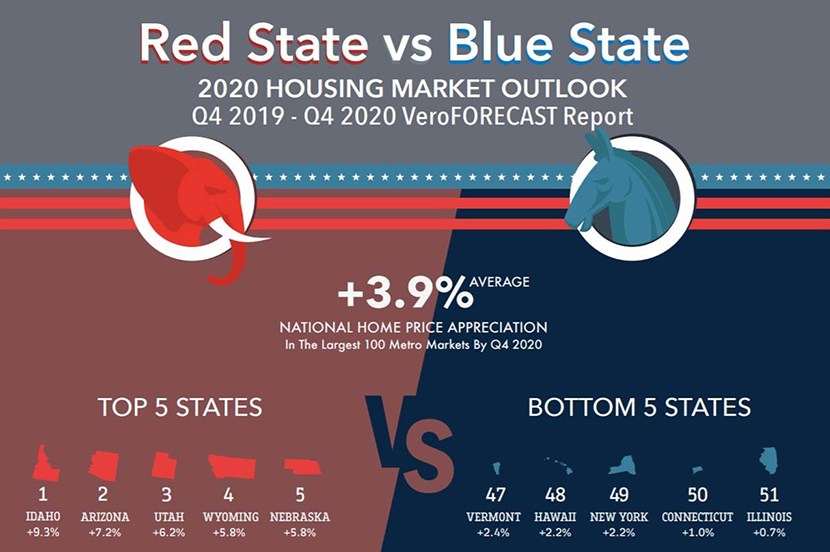 It’s an election year, and no matter how you try, you’re not going to get away from politics. Not here, nor in the housing market. So, take a sip of coffee and read on.

Eric Fox, Veros Vice President of Statistical and Economic Modeling, said the disparity is partially due to stagnant population growth in many blue states, such as Illinois, Connecticut and New York. On the other side of the aisle, red states such as Idaho, Arizona and Utah are experiencing population growth, resulting in high demand and relatively strong home price appreciation.

Fox also noted the VeroFORECAST home price model has seen a shift away from coastal states that traditionally led the country in home price appreciation. “For years, we saw states with high population centers like California and New York dominating home price escalation,” he said. “We are now seeing states like Idaho and Arizona leading the way. Outmigration from the coasts to the interior of the nation is undeniable.”

The analysis said in addition to low or no population growth and outmigration happening in many blue states, another potentially contributing factor that has hampered price appreciation is the $10,000 cap on the state and local tax deduction, known as SALT. In markets where these taxes are high, particularly in New York, New Jersey, California and Connecticut, values are flat or very slow to appreciate in 2020.