Round 3: Initial Unemployment Claims Pile Up 3rd Week in a Row 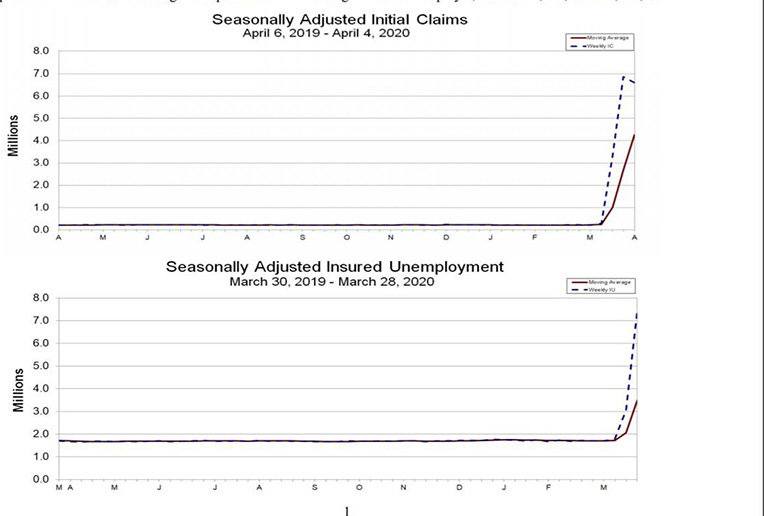 Nearly 6.6 million Americans filed new applications for unemployment benefits during the first week of April, the Labor Department reported yesterday, bringing the total number over the past three weeks to nearly 17 million.

“It now seems likely that we have passed the peak of layoffs, but the extent of the damage from COVID-19-related shutdowns is staggering,” Bryson said. “Moreover, the insured unemployment rate, the proportion of eligible individuals who are currently receiving unemployment benefits, surged 3.0 percentage points to 5.1%, exceeding the Great Recession peak of 5.0%, which was not reached until May 2009.”

Bryson said the magnitude and the speed at which layoffs are occurring are “simply unprecedented.”

“Looking ahead, jobless claims should remain elevated, and we would not be surprised to see several more weeks of initial claims in the millions,” Bryson said. “We look for the economy to shed more than 20 million jobs in the second quarter, which implies that by June the level of nonfarm payrolls will stand 14% below their February 2020 peak.”

Bryson said the bright side—and there is a bright side—is for the labor market to start to recover this summer. He said GDP growth should turn positive again in the third quarter as the economy starts to emerge from the lockdowns that have been ordered in most parts of the nation and fiscal measures that Congress and the Administration put in place take hold.

“As the economy re-opens, businesses that have remained viable should begin to recall furloughed workers,” Bryson said. “Therefore, we look for very rapid growth in nonfarm payrolls in the second half of the year, which should cause the unemployment rate to recede considerably.”

“We expect a sharp drop in growth in Q2 2020, with a recovery late in 2020 and into 2021,” said MBA Chief Economist Mike Fratantoni. “There remains the possibility of a U-shaped recovery as well, with things staying worse for longer as the ripple effects from business closings, restricted in-person activity, and job losses linger, before a steep bounce back beginning later in 2021. The success of the public health measures in place and planned for the months ahead will make the difference in these paths. We expect the unemployment rate will peak above 9 percent by the end of 2020, before falling back to 5 percent by the end of 2021.”