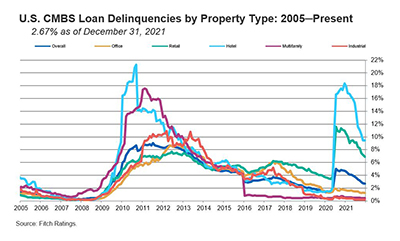 Fitch said resolutions totaled $796 million in December, down from $1.2 billion in November. New delinquencies of $593 million were well below the $850 million monthly average for 2021.

Fitch noted it anticipates volatility in 2022 as 30-day delinquencies more than doubled to $2.7 billion in December from $1.1 billion in November.

The hotel sector had the highest percentage of delinquent loans at 9.43 percent, Fitch reported. Retail ranked second at 6.92 percent, followed by office at 1.23 percent, multifamily at 0.44 percent and industrial at 0.16 percent.

In its December delinquency report, Trepp LLC, New York, said several big office loans became 30 days delinquent during the month, including 245 Park Avenue in New York and 181 West Madison Street in Chicago. Looking at loans in their grace period, 2.13 percent of loans by balance missed their December payment but were less than 30 days delinquent. That was up eight basis points for the month.