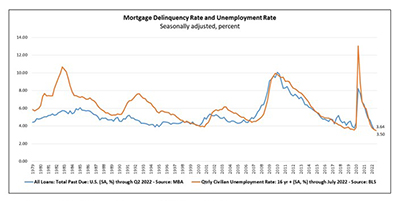 The quarterly MBA National Delinquency Survey reported the delinquency rate for mortgage loans on one-to-four-unit residential properties decreased to a seasonally adjusted rate of 3.64 percent of all loans outstanding at the end of the second quarter. The delinquency rate fell by 47 basis points from the first quarter and by 183 basis points from one year ago to its lowest level since MBA began the survey in 1979.

“Most of the improvement across all product types – FHA, VA, and conventional loans – resulted from a decline in the loans that were 90 days or more delinquent but not in the foreclosure process,” Walsh said.

Walsh also noted of economic indicators that can lead to mortgage delinquencies, the U.S. unemployment rate seems to be the best gauge of loan performance. She said despite inflationary pressures, stock market volatility, increases in mortgage rates, and two quarters of economic contraction – often defined as a recession – the job market remains incredibly strong. The unemployment rate was 3.5 percent in July – a half-century low that tracks closely with the record-low mortgage delinquency rate.

“Foreclosure inventory levels and foreclosure starts remain well below historical averages for the survey – a strong indication that servicers are able to help delinquent borrowers find alternatives to foreclosure,” Walsh said. “Such alternatives include curing, loan workouts, home sales – with possible equity to spare, or cash-for-keys and deed-in-lieu options.”

–The delinquency rate includes loans that are at least one payment past due but does not include loans in the process of foreclosure. The percentage of loans in the foreclosure process at the end of the second quarter was 0.59 percent, up 6 basis points from the first quarter of 2022 and 8 basis points higher than one year ago. The foreclosure inventory rate remains below the quarterly average of 1.43 percent dating back to 1979.

–The percentage of loans on which foreclosure actions were started in the second quarter fell by 1 basis point to 0.18 percent. The foreclosure starts rate remains below the quarterly average of 0.41 percent dating back to 1979.

The NDS covers 39 million loans on one- to four- unit residential properties. Loans surveyed were reported by over 100 servicers, including independent mortgage companies, and depositories such as large banks, community banks and credit unions.