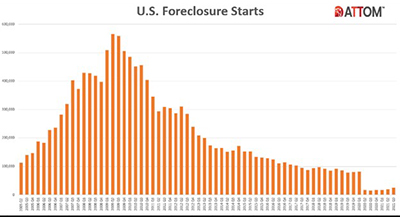 ATTOM, Irvine, Calif., said third-quarter foreclosure filings rose by 34 percent from the second quarter and by 68 percent from a year ago.

The report said September foreclosure actions were nearly 70 percent lower than prior to the COVID-19 pandemic and Q3 60 percent lower than a year ago. “Even with similar increases in foreclosures over the next few months, we’ll end the year significantly below what we’d see in a normal housing market,” Sharga said.

–Lenders started the foreclosure process on 25,209 U.S. properties in the third quarter, up 32 percent from the previous quarter and up 67 percent from a year ago — the first double digit quarterly percent increase since 2014.

–Counter to the national trend of quarterly increases, metropolitan areas with a population greater than one million that saw a decline in foreclosure starts were Charlotte, N.C. (down 32 percent); Portland, Ore. (down 26 percent); Rochester, N.Y. (down 17 percent); San Jose, Calif. (down 13 percent); and Hartford, Conn. (down 6 percent).

“So far the government and the mortgage industry have worked together to do an extraordinary job of preventing millions of unnecessary foreclosures using the foreclosure moratorium and mortgage forbearance program,” Sharga said. “But there are hundreds of thousands of borrowers scheduled to exit forbearance in the next two months, and it’s possible that we might see a higher percentage of those borrowers default on their loans.”

–Lenders repossessed 7,574 U.S. properties through foreclosure (REO) in the third quarter, up 22 percent from the previous quarter and up 46 percent from a year ago the first quarterly increase since Q1 2016.

–Properties foreclosed in third quarter had been in the foreclosure process an average of 924 days, up slightly from 922 days in the previous quarter but up 11 percent from 830 days a year ago.