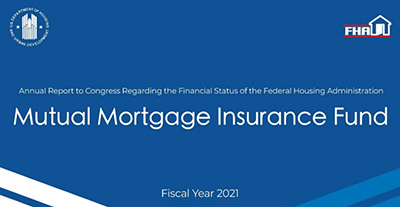 HUD on Monday released its fiscal year 2021 report to Congress on the financial health of the Federal Housing Administration Mutual Mortgage Insurance Fund, showing a nearly 2 percent increase in the fund’s capital ratio to more than 8 percent, well above its congressionally mandated minimum of 2 percent.

As of September 30, the report said the MMI Fund Capital Ratio grew to 8.03 percent. The Capital Ratio, which represents MMI Fund capital as a share of Insurance-in Force, exceeded the 2 percent statutory minimum for the sixth consecutive year after falling below the mandate back in 2011, sparking widespread concerns at the time about the viability of the Fund.

HUD also reported as of Sept. 30, FHA had active insurance on more than 7.8 million single family forward and reverse mortgages, with a total unpaid principal balance of more than $1.2 trillion. HUD said of those, 1.5 million homeowners, or nearly 20 percent of all homeowners with FHA-insured mortgages, were granted a COVID-19 Forbearance since March 2020, and of these homeowners, 1.2 million transitioned from forbearance, while more than 387,000 remained in forbearance at the end of fiscal 2021.

“The strength of the fund is a promising sign and solidifies the important role FHA fulfills in making homeownership a reality for first-time homebuyers and those with lower incomes.” HUD Secretary Marcia L. Fudge.

“As the recovery from the pandemic continues, the Fund remains well positioned to withstand future economic events and endure the outcomes from the pandemic-induced delinquencies that remain in forbearance or are seriously delinquent,” the report said.

Additionally, the report said for the first time since 2015, the Home Equity Conversion Mortgage reverse mortgage program posted a positive ratio, primarily due to strong national home price appreciation. The HECM portfolio also saw improvement in its valuation, with a stand-alone capital ratio of 6.08 percent as of September 30, compared to a negative 0.78 percent capital ratio from the previous year.

The report also noted the percentage of first-time homebuyers using FHA insurance reached a new high of 84.73 percent of total FHA forward mortgage purchase endorsements. The share of mortgages insured by FHA to minority borrowers reached nearly 42 percent of all FHA forward mortgage insurance endorsements in FY 2021. FHA said it served double the percentage of Black and Hispanic borrowers when compared to those served through mortgage originations by the rest of the housing market this past fiscal year.

“The continued strengthening of the FHA Mutual Mortgage Insurance Fund is a welcome development that highlights the strong financial stewardship of the Fund by HUD and other stakeholders, including lenders. A healthy FHA program is necessary to ensure the broad availability of sustainable mortgage credit to low- and moderate-income households, minority borrowers, first-time homebuyers and other historically underserved communities.

“With the combined Fund capital ratio now at 8.03%, it is appropriate for HUD to expeditiously examine reductions in FHA mortgage insurance premiums, which have been at their current levels for nearly seven years. HUD should focus on pricing changes that have the greatest impact on affordability and sustainability for borrowers, such as reductions to the annual premiums, while being mindful of the current delinquency levels in the FHA portfolio and the elevated number of borrowers who remain in forbearance.

“MBA looks forward to our continued partnership with HUD as we pursue important reforms to strengthen further the FHA program – including upgrades to FHA’s technology and platforms and modernization of FHA’s servicing requirements.”